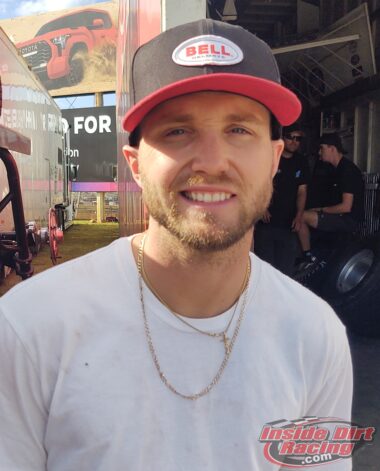 Jacob Allen has been a regular with the World of Outlaws NOS Energy Drink Sprint Car Series for several years and in each of those seasons the 28-year-old driver had shown steady progression. Then in 2022, that progression took a big leap forward as the Hanover, Pennsylvania native not only proved himself to be a solid top-10 runner but also a constant threat to win feature races.

During this most recent campaign, Allen scored four WoO points-paying wins after having notched only one previous triumph in his time on the circuit. At the same time, his 15 top-five and 36 top-ten finishes far exceeded totals achieved in any other season. Those numbers ultimately led to a 9th place result in the final series standings.

But it wasn’t just Allen who made a big leap in 2022. Shark Racing as a whole became more of a week-by-week threat with both Allen and teammate Logan Schuchart winning multiple feature races. That two-car operation is owned by legendary Sprint Car racer Bobby Allen, who is the father of Jacob Allen and the grandfather of Schuchart.

For Allen, this was not a breakout season but rather a culmination of years worth of effort. A preliminary night non points paying win leading into the Knoxville Nationals at the famed Knoxville(IA) Raceway and a victory in the Jason Johnson Classic at Missouri’s Lake Ozark Speedway served as highlights from a banner year.

“Yeah, I would say that would be a better way to put it,” Allen declared in an interview with InsideDirtRacing.com. “For me, I didn’t have a lot of experience before I came on the Outlaw tour. It takes a lot of time, you have to get that experience. In our situation, we’ve had to learn to work on our cars for ourselves. My dad, he hadn’t been doing it for so many years before we went on the road, so we had to learn together and build up a program against high dollar teams. We’ve been able to stay true to this and not give up. As time has gone on, that’s why we’re able to be up front the way we are.”

Not only is working on the cars a challenge for Allen and the rest of the Shark Racing crew, but the competitors who regularly race on the World of Outlaws circuit are tough. Champions such as Donny Schatz and Brad Sweet joined by many-time winners Carson Macedo, David Gravel and Sheldon Haudenschild along with other regulars and talented part-time racers are in the mix on a nightly basis. As a result, there is never a break from drivers and teams capable of taking checkered flags.

Allen sees the level of competition as a good thing.

“We get to race against the best Sprint Car drivers in the country and I’m thankful for that because you are always pushing yourself each and every race to have a great race car,” the driver of the No. 1A stated. “Every track surface can be different, even if you’ve been there ten times, it could be different when you show up on a particular night. It always pushes you and I think that’s why the guys I race against are the best in the business.” 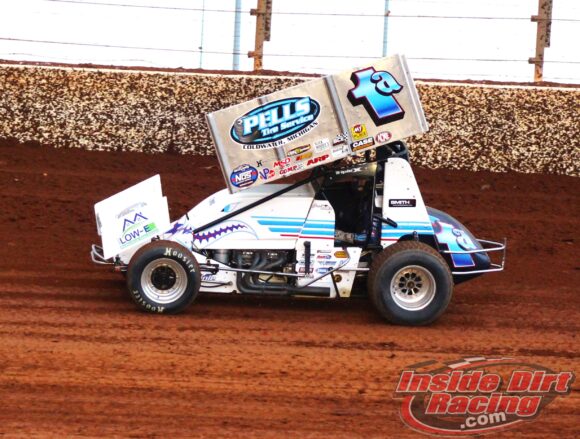 Jacob Allen aboard the Shark Racing No. 1A

Allen believes that his career has greatly benefitted from the fact that his team opted to branch out with the World of Outlaws on a national tour rather than simply racing around home.

Over the past several seasons, Allen believes he has gained more experience and know-how by racing frequently and at different venues.

“That’s what I like about traveling and going to different places because you know how to adapt in your setup.” he pointed out. “I always say it’s like calling an audible, you know, you have your playbook but you have to know when to call an audible at the right time throughout the night. That’s what traveling with the World of Outlaws teaches you. Wet track, slick track, rough track, it doesn’t matter. You can figure out how to be great on anything and that’s what I love.” 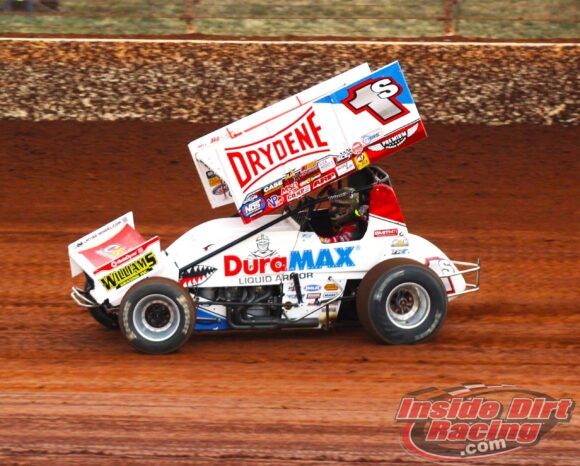 Shark Racing has been lifted by the growth of both Allen and Schuchart(who finished 6th in this year’s standings with five feature wins) over the past few seasons. Now the mission is to continue that growth going forward.

“That’s what we’ve worked hard for. We’re happy about our success but we want to be dominant among everybody. But that’s not something that’s very easy by any means. The goal is to win more races than anybody else between the two of us and to be in the top spots in the points. That’s what we’re going to keep working on and our maturity and our experience plays such a huge factor. To be able to share information between Logan and myself and my dad, I love that about our team. The relationship we have and the information we share with each other, and the reassurance we can give each other is big. That packs such a big punch in this kind of thing. People really struggle to find that kind of chemistry within their team. The fact that we have been able to find that is something I’m really proud about.”