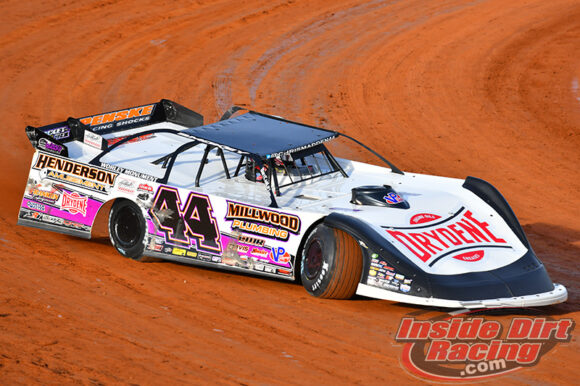 Chris Madden has had a hold over the Mike Duvall Memorial Blue-Gray 100 throughout the course of his career and that stranglehold continued on Sunday when the star driver recovered from a late race pit stop to storm to victory. ‘Smokey’ passed Kyle Strickler just before taking the white flag in the Carolina Clash Super Late Model Series event held at Cherokee Speedway. It was his record setting eighth win in this race.

The Rocket Chassis driver from Gray Court, SC earned $12,000 from the Gaffney, SC track in a race shown live by FloRacing.com.

A total of 27 cars were signed in for competition

At the start of the 100-lap feature it was Madden who jetted to the early lead with Ivey, Mitchell, Watkins and Strickler in his tire tracks. Brown passed by Strickler to make his way into the top-5 just before a lap 4 caution flag was displayed to the field when Ethan Wilson slowed.

Mitchell moved to second on the lap 4 restart with Madden continuing to show the way. However, Ethan Wilson again slowed to bring out a caution on lap 6. When the race returned to green, Madden again led the field but Mitchell and Ivey kept the front runner in their sights.

A lap 19 caution for Jeff Smith’s slowing machine. Watkins moved to fourth on the restart after trading positions with Brown, Those drivers followed the lead trio of Madden, Mitchell and Ivey.

At the race’s one-fourth mark, competitors appeared to be in lap logging mode with everyone sticking to the bottom of the speedway. Just as Ivey had begun to apply pressure on Mitchell for the runner-up spot, Daulton Wilson slowed to bring out a caution on lap 33.

Madden began to leave the door open on the bottom side of the track as the scoreboard clicked off the 40th lap which allowed Mitchell to take a peek underneath. But the No. 44 machine continued to lead when the field did reach the halfway mark.

Just one lap shy of the halfway mark, a yellow flag waved for the slowing car of Daulton Wilson. That car’s flat tire served as a warning sign to the other competitors as this race often comes down to tire wear and attrition. Some drivers took advantage of the caution period to change tires for a second half run to the finish.

Following the restart, drivers continued to run what seemed to be a conservative pace with Madden leading while Mitchell and Ivey stayed close. The leader encountered slower traffic on lap 61 which tightened the top-5 runners.

Cla Knight and Adam Yarborough slowed with flat tires on lap 68 to bring out a caution. That opened the door for numerous drivers to bring their cars to the attention of their crews in the hot pit area for fresh rubber.

Watkins took third away from Ivey on the lap 68 restart then Brown shuffled Ivey back another position. Madden seemed to turn up the wick as he pulled out to his biggest lead of the night by lap 75.

The top-5 running car of Ivey suffered a flat tire on lap 76 to cause another yellow. Only one lap was logged when Bryson Harper slowed with a flat tire. To that point, early pit stop taker Bailes had risen to sixth after restarting from the rear at the midway point.

A multi-car crash on the lap 81 restart forced a red flag as the car of Brett Hamm rolled over. All drivers were reported to be unhurt. Madden hit the pit area during that caution period leaving Mitchell as the leader with Watkins and Strickler following.

The lead car of Mitchell had a right rear tire to go flat on lap 87 bringing out another yellow. That left Strickler in the lead with Watkins and Bailes just behind. On the restart, Daulton Wilson and Madden put their newer tires to good use as they burst into the top-5.

Madden moved to fourth on lap 92 with Strickler continuing to lead over Wilson and Watkins. But caution would once again slow the pace when Mitchell stopped on lap 94 with apparent engine trouble.

Strickler continued to lead when green flag action resumed as Wilson and Madden closed from second and third. Madden claimed second with three laps to go then an outside move out of turn two as the field came toward the white flag.

Madden would then sail to victory to capture his eighth Blue-Gray 100 triumph.

Rich’s Ramblings: After a great Dirt Late Model season, what do we do now?