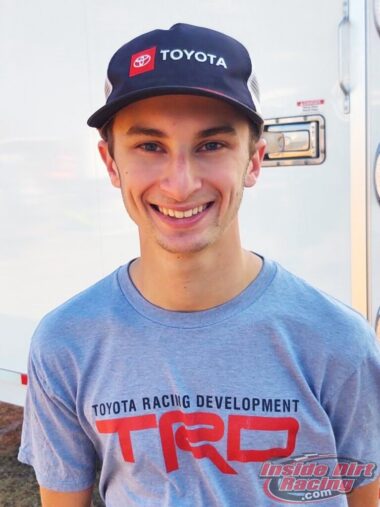 Michael ‘Buddy’ Kofoid has had quite a year in 2022. The 20-year-old rising star from Penngrove, California has continued his winning ways in his USAC National Midget, scored his first career win with the World of Outlaws NOS Energy Drink Sprint Car Series, won the inaugural High Limit Sprint Car Series event, entered two NASCAR Camping World Truck Series races along with an ARCA Menards Series contest. And there is still racing left to do.

Consider too, there are more career goals for this Toyota Racing Development driver to strive for. The hope is that all of the success from not only this season but previous years along with his ties to Toyota will help him to someday reach an even higher level in motorsports.

“For me, it’s always been to get to Cup but that’s a long road and it’s tough,” Kofoid said in an interview with InsideDirtRacing.com. “Toyota is obviously a good manufacturer to be involved with. They have all the right resources and the sponsors and opportunities to get there. That’s where ultimately I’d like to be but I do enjoy what I’m doing right now but I’m still looking ahead.”

The Toyota connection helped to land Kofoid with the most successful USAC Midget team over the past several years in Keith Kunz Motorsports. The young driver of the No. 67 car has taken full advantage of that opportunity by piling up scores of feature wins. And with just a few races remaining on the 2022 schedule for that series, he leads the overall standings in his quest to win a second consecutive USAC National Midget Car Series title.

His success in Midget racing led to an opportunity to drive a Sprint Car. The deal came together late in 2021 and ultimately led to Kofoid’s first career WoO Sprint Car victory in a feature race held in June as part of the Huset’s High Banks Nationals. The No. 11 machine took the lead away from Brock Zearfoss early but was passed by James McFadden later in the race at the Brandon, South Dakota facility. Eventually, Kofoid would retake the top spot and sail under the checkered flag to collect the $15,000 first prize.

“We put this deal together at PRI at the end of last year,” Kofoid explained. “Leighton Crouch owns the car and the team. I’ve actually raced with is son(Brenham Crouch) the last couple of years at Keith Kunz Motorsports and I got to know Leighton through them. I knew he was wanting to put a team together out in the Midwest and run on a bigger scale but it didn’t come to fruition until December of last year then we decided to race in select shows around my Midget stuff and all my pavement Late Model stuff and everything else I have with Toyota.” 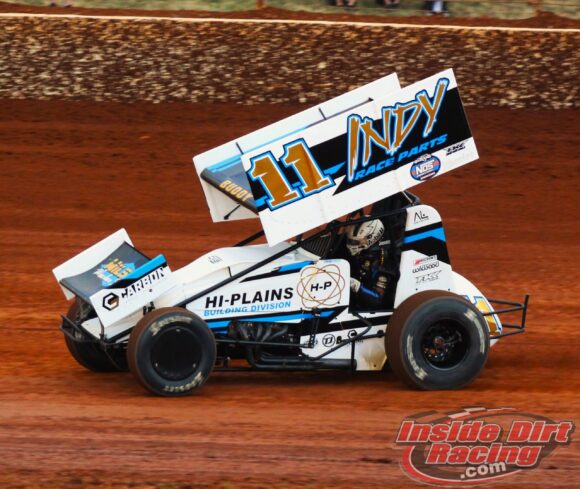 Kofoid’s Sprint Car roots run deeper than just this season, however. He has been in one of those types of cars since an early age.

“I actually started in Sprint Cars before I ever raced a Midget and that’s what I was planning to be was a Sprint Car driver growing up in California,” he pointed out. “I moved to the Midwest to race Sprint Cars and that opened to door for me to get in the Midget. I got pretty good in the Midgets and the last couple of years that’s been my main focus and that’s cut back on my Sprint Car stuff. Some of the scheduling I have has allowed me to get back into Sprint Cars on a more consistent basis.”

There is another goal in sight for this talented pilot. And a step has already been taken in that direction with two starts in the NASCAR Camping World Truck Series for Kyle Busch Motorsports. After starting 5th in the race held at Knoxville(IA) Raceway, Kofoid drove to an 11th place result. That show combined with his start on the dirt covered Bristol Motor Speedway saw the No. 51 Toyota completed all of the assigned laps with its driver gaining valuable experience.

No matter what form of motorsports he competes in, Kofoid knows that the teams he has around him are the key to success.

“I’ve only done two Truck races and they were both on dirt. The main thing that I go back and forth with would be Midgets to Sprint Cars. I think I’ve done enough that I have a certain feel that I expect where it’s not really foreign. I’ve done it long enough and I’m with really good teams makes that transition easier.”