Home Blogs Thankful for the Blessing of Motorsports

Thankful for the Blessing of Motorsports 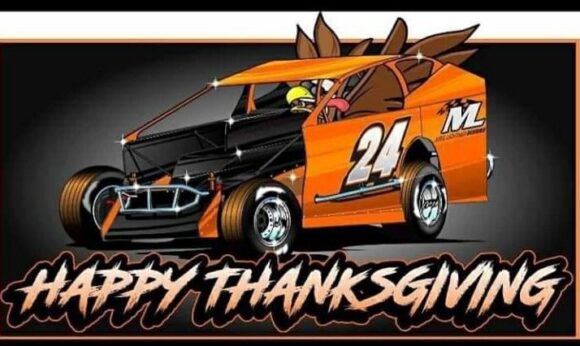 This is the time of year in which many rightfully take the time to consider all they are thankful for. I am fortunate enough to have much that I am grateful for and I have decided to dedicate this post to some of those things.

For as much of my life as I can remember, I have enjoyed racing. It literally started from day one when my dad named me after Richard Petty and the love of motorsports has only grown from there. I have been lucky enough to be in attendance for some of the biggest moments in racing. I was there to witness Dale Earnhardt’s first win at Bristol Motor Speedway in 1979 as well as Petty’s 200th win at Daytona International Speedway in 1984.

Since 2008, I have been fortunate enough to be a part of the sport I have loved for my entire life by writing stories, conducting interviews, and taking photos for newspapers and websites. Those 14 years have added much to my list of things to be thankful for.

Here are just a few of the things related to racing that I am grateful for:

I am thankful for the sights and sounds of motorsports: There is nothing like the sight of a pack of race cars ripping around a track at full speed while dicing for position as they roar toward the reward of a checkered flag and the winner’s trophy. Colorful, craftily molded cars being skillfully maneuvered around short tracks, road courses, super speedways on both paved and dirt surfaces make for quite a sensation of sight.

And speaking of that roar, nothing in any other form of sports compares to the sound of a pack of race cars. The sound of a race car is probably the greatest indicator of the raw power being generated by these awesome machines. And perhaps the greatest thing about the roar is that it drowns out everything else around and forces total focus on the speedway.

I am thankful for the skills and talents of the competitors: No matter how much we all may think we can do it, there are only so many people in the world who can actually steer a powerful race car around a paved or dirt track well enough to not only make the prescribed distance but to also pass other cars while doing so and then go on to win races.

And more than that, it never ceases to amaze me just had skilled the people who prepare and maintain these cars are. Not being a mechanical person myself, I have an amazing amount of respect for those who construct the machines that are fast enough to continually keep pushing track records lower and lower even as rule makers attempt to slow them down or when changes are made to the components they use.

I am thankful for the dedication and passion of racers: Considering the amount of time spent traveling for days far away from home, working in extreme heat as well as bone chilling cold, and in inhospitable and often poorly lit pit areas, those who work on race cars have to be among the most passionate professionals in any field.

I have always admired people with passion for whatever it is that they do. As I write this piece, I am watching the FIFA World Cup. I am not necessarily a soccer(or futbol) fan but those who participate in and follow the sport are incredibly passionate which causes me to want to see what that event is all about. I get that same feeling from the various forms of racing I follow.

Many of those who are involved are not doing what they do for money. Rather, they just want to be a part of something they love. In many ways, I feel that same way. Michael Moats and I are not making a lot of money from this site, but as far as I am concerned, this is a way to be involved in some small way in racing so the money doesn’t matter so much.

I am thankful for the anticipation of race day: Nothing tops the feel of anticipation when driving to a race track or even tuning in to a broadcast on the day of a big racing event. As the time approaches for the engines to fire the pulse rate goes up as the excitement builds.

Even with as many races as I have attended over my 55 years on this planet, I still get that adrenaline rush when I pull through the entrance of a race track and when I first hear the engines fire to life.

I am thankful for the distraction from real life: When you’re at a race track the troubles of everyday life melt away. Work related issues, paying bills, politics, and any other problems life may have thrown your way can, at least for a few hours, become secondary to the events taking place on the race track.

It’s what is happening on the track that matters, at least for a short time.

I am thankful for the people: Of all the things I am thankful for when it comes to racing, the one that stands out most is easily the people related to this sport. Drivers, promoters, crew members, fellow media members, and fans are the life blood of the sport. Each and every person involved betters the sport in his or her own way.

From a personal standpoint, it blows my mind that I have had the opportunity to talk to and write stories about NASCAR drivers, Dirt Late Model stars, Sprint Car aces, and scores of local and regional heroes during the time I have been involved in covering motorsports. Further, the fact that there are people who spend a part of their day reading the things I write blows my mind.

I am grateful for every person racing has brought me in contact with.

Conclusion: Indeed, racing gives me much to be thankful for. Those reasons listed above are just a few of mine. No doubt, those of you who are reading this piece have your own. If not go to a race track or tune in a motorsports broadcast and you will quickly find a few things to be thankful for.