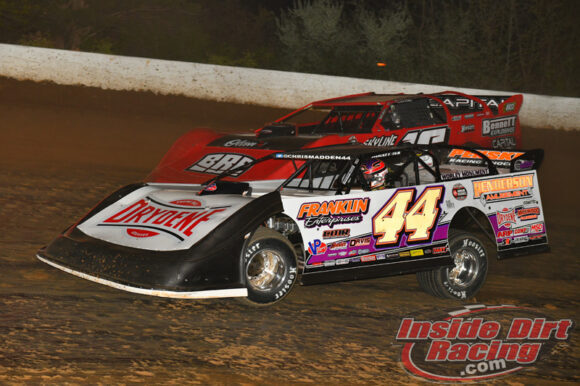 GAFFNEY, SC – August 30, 2021 – For the first time since April, the World of Outlaws Morton Buildings Late Models return to the Southeast for three nights of jam-packed racing action in three different states.

The weekend kicks off Thursday, Sept. 2, at Cherokee Speedway in Gaffney, SC, for the rescheduled Rock Gault Memorial. The 60-lap Feature, paying $40,000-to-win, is the highest paying event in the track’s history.

The Series moves South on Friday, Sept. 3, for a visit to Lavonia Speedway in Lavonia, GA—the only trip to the Peach State in 2021. The Most Powerful Late Models on the Planet will battle for $10,000 in a 40-lap event.

On Saturday, Sept. 4, the Southeastern swing finishes off with a stop at Volunteer Speedway, in Bulls Gap, TN, for another 40-lap Feature paying $10,000-to-win.

Here are some of the storylines to keep an eye on this weekend:

Home Field Advantage: No one is more excited for the Series’ return to the Southeast than Chris Madden. The Gray Court, SC driver has 27 victories at Cherokee Speedway, including a win earlier this year during a Drydene Xtreme DIRTcar Series event.

“Smokey” has also had success at the other two tracks the Series will visit this weekend, winning at Lavonia in 2019, and Volunteer in 2017. Madden already has a victory in the Volunteer State this season. He won the “Tennessee Tip-off at Smoky Mountain Speedway in March.

He’s currently second in the World of Outlaws points standings on the strength of four wins, 22 top fives, and 33 top-10s.

Two wins Away: All eyes are on the Rocket1 Racing team as Brandon Sheppard moves closer to obtaining a piece of World of Outlaws history. After winning last weekend at Davenport Speedway, the New Berlin, IL driver is two victories away from tying Josh Richards for the most all-time (78).

Sheppard and his team have hit a stride over the past few weeks, finding Victory Lane three times in the last seven races.

The “Rocket Shepp” won at Cherokee earlier this season and has a win at both Lavonia and Volunteer.

Sheppard currently leads the Series standings—178 points ahead of Chris Madden. If he can hold on to that advantage, he’ll win his fourth Series title, also tying Richards for most all-time.

Here Come the Heavy Hitters: When a $40,000 prize is on the line, you can expect some of the top names in Late Model racing to fight for it.

Many drivers who already have World of Outlaws wins in 2021 are expected to attend Thursday’s event at Cherokee, including Brandon Overton. “Big Sexy” is having the best season of his career, winning 21 times, including both “Dirt Late Model Dreams” and the Firecracker 100.

Another name to keep an eye on Thursday is Jonathan Davenport. This season, the Blairsville, GA campaigner already found success in big money races with the World of Outlaws, winning the $50,000 prize at the USA Nationals at Cedar Lake Speedway.

Those two, along with 2014 Series champion Tim McCreadie hope to cash in on the chance at taking home big money.

Boom is having his best World of Outlaws season to date, scoring three top-fives and 10 top-10s this season. If he continues to trend in that direction, his first career World of Outlaws victory may not be far behind.