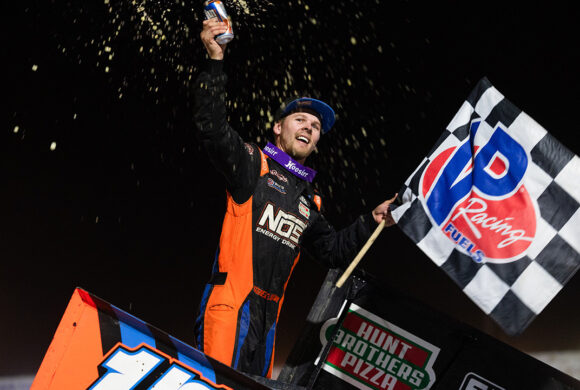 RAPID CITY, SD – Aug. 29, 2021 – Sheldon Haudenschild was sick of second. He had to settle for the runner-up spot in his last two races. No more. That ended at Black Hills Speedway.

With the correct prediction of a move by 10-time World of Outlaws NOS Energy Drink Sprint Car Series champion Donny Schatz, Haudenschild was able to break that streak and win the Rushmore Outlaw Showdown – along with its $10,000 payday.

Like a driver stuck in Ground Hogs Day, Haudenschild was pinned against Schatz on the front row for the DIRTVision FAST PASS Dash and 25-lap World of Outlaws NOS Energy Drink Sprint Car Series Feature. In the Dash, he lost the battle. In the Feature, he won the war.

Schatz, on the outside pole, launched ahead of Haudenschild on the first lap of the Dash and ran away with the win. When the Feature commenced, it was Haudenschild’s turn to try the same.

Starting on the outside pole, Haudenschild rocketed around the outside of Schatz off Turn 2 but the CARQUEST #15 fought back and pulled even with Haudenschild down the backstretch to retake the lead. However, the caution flew before their battle could continue. Haudenschild had another free shot. Only, this time, Schatz was ready for it.

When they saw the green flag, again, Schatz time his restart better than Haudenschild and pulled ahead of him into Turn 1. He drifted up the track to block Haudenschild’s expected run off Turn 2. This is where Haudenschild made the correct prediction.

Expecting Schatz to move up, the NOS Energy Drink #17, shifted hard left on the exit of the first corner and darted underneath the 10-time champion down the backstretch. Like Schatz on the initial start, Haudenschild had the better momentum and pulled ahead of Schatz into Turn 3. From there, the Wooster, OH driver hit the afterburners and ran qualifying laps for the remainder of the race.

“I can’t give it up enough for Ripper, Steve and Drew,” Haudenschild said of his Stenhouse Jr.-Marshall Racing crew. “They bust their butt. We had to change an engine there before Hot Laps. They always make sure our shit is right.”

Five cautions plagued the progress of the Feature and Haudenschild’s command out front. That didn’t hinder the fighter jet-like speed of his car, though. On every restart, Haudenschild found something no one else could and put a second gap between him and the field in a single lap.

On multiple occasions this year, circumstances out of Haudenschild’s control robbed him of a win. With several drivers blowing tires throughout the event, anxiety tapped on the shoulder of his crew as they watched from the top of the team hauler, waiting to see if they would be faced with the same fate.

Inside the cockpit, Haudenschild knew exactly what he needed to do to avoid an issue.

Behind him, Schatz, who was on a mission to sweep the weekend after claiming his first I-80 Speedway win on Friday could do nothing but watch the black and orange #17 rocket away from him on every restart.

“We tried to move around and catch him,” Schatz said. “I was going to have to make something work there in the middle of (Turns) one and two. Just could never hit it right there. We could stay with him at the end. At the beginning, he set a pretty good pace. Hats off to him, he did a great job.”

With the fortune of blown tires by others, Gravel was able to keep his equipment clean and round out the podium.

“I felt like we had a pretty good car there,” Gravel said. “I felt like we were just as good as anybody. Just track position is really important. I had a hole in my right rear on the last restart and had about four or five pounds left in it.”

Two-time and reigning champion Brad Sweet managed to salvage a fifth-place finish after blowing a tire early. However, with Gravel finishing ahead of him, he still lost a few points – now holding a 120-point lead over Gravel.

Rookie of the Year contender Brock Zearfoss continued his career run as his sixth-place finish was his fifth top-10 in a row.

For Haudenschild, the victory was his first at Black Hills Speedway and eighth of the year – a new career-high of wins in a season for him.

“To finish the weekend off with a win is great,” Haudenschild said.

UP NEXT
The World of Outlaws NOS Energy Drink Sprint Car Series returns to Washington for the first time since 2019 for the inaugural Sage Fruit Skagit Nationals at Skagit Speedway – Friday to Sunday (Sept. 3 to Sept. 5). CLICK HERE for tickets.

If you can’t make it to the track, you can watch all the action live on DIRTVision – either online or through the DIRTVision App.