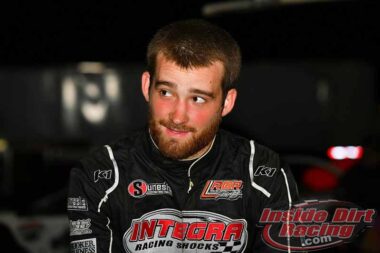 Whenever the fans or media of Dirt Late Model racing talk about driver Josh Rice the conversation almost always turns to the wall-brushing style the young racer employs to score wins and thrill spectators. His no-holds-barred type of driving is indicative of the way someone in their early 20’s might attack a race track and this hard charger’s skill has resulted in checkered flags and trophies being added to the Verona, Kentucky driver’s collection on a regular basis.

So far in 2021, Rice has amassed ten triumphs either in or near his home state. Among those wins were two victories that were particularly noteworthy. The No. 11 Rocket Chassis finished first in a $15,000-to-win Lucas Oil Late Model Dirt Series feature at Florence(KY) Speedway on May 1st after a late race battle with Hudson O’Neal. That win was followed later in the summer by a $10,053 victory in the Schaeffer’s Oil Southern Nationals opener at the Beckley(WV) Motorsports Park.

This past weekend proved to be a successful one for Rice and his team. A $4,000 win sanctioned by the Valvoline Iron-Man Series at Ohio’s MRP Raceway Park on Friday night was followed by a second-place effort behind Michael Chilton with that same tour at Kentucky’s Lake Cumberland Speedway.

“Overall it’s a solid weekend,” Rice declared in an interview with InsideDirtRacing.com. “I really hated seeing that last caution there. I just wanted to slide him to the lapped car and maybe pick him in behind them lapped cars but that got taken away from me there with that caution. Second is a pretty good feat for having never been here before. We’re excited, it’s a nine-grand weekend for us so you can’t be mad about that. Michael drove a heck of a race, he didn’t mess up at all. He got her done.”

Rice’s run was particularly remarkable considering that the young driver had never raced at Lake Cumberland before this past Saturday night. How is it that he had never been to the track located in his home state?

“I don’t know,” he offered. “It just turned out that way. We never get to come down here, it’s about three hours for us. Dad has only been here once or twice so I guess the weekends just didn’t line up right where we’ve never been down here. I’m sure we’ll be back as good as we were tonight. We’ve got a good notebook to work off of now. We’re not going to start where we did at the beginning of the night. We weren’t very good when we first got here. I’m happy with how we turned it around by adjusting on the car really good. I was able to go up high but I was on the bottom a lot of the race and I’m pretty excited about that.” 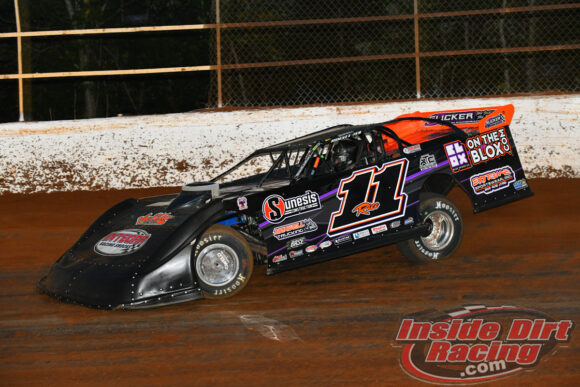 Josh Rice has his No. 11 Rocket Chassis against the fence

Speaking of going to the high side, Rice has made a name for himself by taking the high line right against the cushion around dirt tracks. Often, he runs so near to the outside wall that sparks fly as the right rear of the car scrapes against the concrete or guardrail. It’s a show many fans have grown to enjoy since the earliest days of his racing career.

“I guess I’m not the best with throttle control,” Rice explained. “I’m working my best at it but in those Modified days I never could get a car to work right and I had to do what I had to do. I had to get up there and just lean on it and that’s just what I grew up knowing in the Mods. I guess it just transferred over to the Late Models when I switched over.”

This interview took place in the Lake Cumberland Speedway pit area following the Iron-Man Series feature race. The driver was in the process of examining his scarred right rear quarter panel.

“It looks like that a lot but we’ve got our breakaways pretty good to where we’ve only got two deck panels and a breakaway spoiler,” Rice said. “It doesn’t cost us anything when we’re running up front. To do that and run up front, to hell with body damage, it ain’t nothing. I think we’re getting our car better to where we can start getting off the cushion. I feel like we’re right there and we just need a little bit more so we can come down off of it a little bit. I stayed off of it a lot tonight and, like I say, I’m pretty excited about that.”

Rice says that he can feel the energy of the fans from inside the cockpit of his car as they cheer his all out style.

“Oh man, when I got to second, I was looking at the crowd as we were going around there. It’s exciting, especially when you’ve got guys messing around on the bottom you can just hammer that top one time especially when you ain’t got as good of a car as them. You can feel like you outdrove them, I guess.”