Midway through the 2021 season we began to hear of the possibility of a tire shortage in the dirt racing world. While that proved to be an aggravation until season’s end, the sport seemed to navigate its way through effectively by applying tire limitations at most races. And it appears as if the shortages are again playing a role as some even suggest that races may be cancelled due to a lack of tires. Will it actually come to that?

Richard: According to reports, the tire producers dipped into their stockpiles to satisfy demands brought on when racing resumed following the 2020 pandemic-related shutdowns. Those reports also suggest that due to a lack of raw materials and workers, the stockpiles have not been sufficiently replenished. Essentially, the tire makers are immediately sending out what they make for use rather than rebuilding their supplies.

In other words, the demand is so great that they are only able to produce tires that will immediately be raced on which is all their current production abilities will allow for.

Obviously, there can’t be any racing without tires. If supplies are limited, it could be that only certain teams who plan to race in the bigger events will be supplied. That, of course, opens an entirely different debate of should some smaller teams or races be excluded from distribution in favor of the more well-known.

Even Lucas Oil Late Model Dirt Series director Rick Schwaillie was recently quoted in a DirtonDirt.com story as saying that there is the possibility of event cancellations due to tire availability issues.

In the end, however, I have always been of the belief that things like this tend to find ways to get worked out. Last year we saw the various series institute tire limitation rules that we continue to see in 2022. Until I see otherwise, I am planning on going to the same number of races I always do.

That said, though, I believe if it actually does come to the point that cancellations do in fact occur, it will be the lower levels affected first.

Michael: The tire situation is one that bares watching as the spring continues and really through the whole year. I don’t know if the supply situation will get much better any time soon. Over the weekend, I saw where manufacturer’s of computer chips said it could be 2024 before they get caught up. I think we’ll see a lot of that in all aspects of life.

I agree with you in that I don’t see the tire shortages playing a role in the bigger events. The only exception I would make on that is some of the drivers that typically race close to home may not venture out to a bigger event. What I do see is it being a factor in regional races and weekly races.

I had a promoter tell me last week that any questionable weather forecast for a regional series race will be used as the excuse to cancel, and not postpone, some of these races. Between tire demands and high fuel prices, drivers may be a bit more picky about where they race and when. If they see a race with a questionable weather forecast, they may not bother traveling 3-4 hours to that race. In turn, that will cause the promoters to say they won’t race. I can see those scenarios play out and we do get more “rain outs” than we have in past seasons.

One thing I saw online was the suggestion that any series that only allows one brand of tire to run the other as well. I think that is worth looking into. But you and I both know any series that has a one-brand rule has that because they are getting some decent money from that specific tire company. Allowing a competitor tire to be used would cause problems for any type of contract that series, or even track, would have. 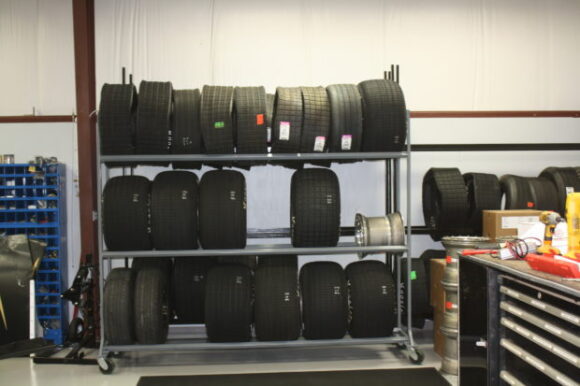 Tires look to be an issue all season

As is almost always the case during the spring, weather is causing races to be either postponed or even cancelled. Having such inconsistency in the schedule can make it tough for teams to find an early rhythm, right?

Richard: Weather interruptions during the spring of the year are certainly nothing new so I’m sure teams prepare for them. That said, though, it does seem that once they come out of Florida and have that break of a couple of weeks or so to recover from all the racing they do down there in January and February, racers are likely ready to get back to it. And more, I’m sure many of them are ready to get squared back up financially after spending money on all the new pieces and parts that were bought during the ever-shortening off season.

More than getting out of rhythm, there may be cases of needing to get some money flowing which obviously doesn’t happen when they aren’t racing.

Racing in the cold or having to work in a muddy pit area may not be ideal, but for some, it is probably better than not doing anything at all. There will be plenty of racing to come when the warmth of summer gets here but I would say some, especially those who got off to a great start, would like to keep that momentum and rhythm going as long as they can.

Michael: It has been a bit of an odd year, so far. The Bristol Dirt Nationals dominated the landscape for two weeks. The World of Outlaws CASE Construction Late Model Series had races scheduled for both of those weekends but one of those was cancelled. Lucas Oil opted to take those weekends off. They raced this past weekend, had one of two races the weekend prior to Bristol, and the weekend at 411 Motor Speedway was wiped out because of weather. From a national touring standpoint, it has been hit or miss with a lot of misses.

The regional series have faired better. The Ultimate Super Late Model Series has been racing on a regular basis to this point. The Schaeffer’s Oil Spring Nationals has scheduled off weeks around Bristol, but get back to it this weekend.

I think once the weather clears up and warms up, we’ll see more racing on a regular basis unless the previous discussion comes into play with available tires. 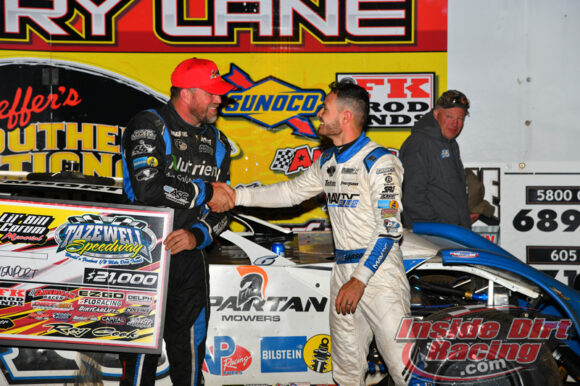 A big week of racing lies ahead in east Tennessee. What events are you looking forward to?

Richard: There is no shortage of big races in east Tennessee throughout each season and that is particularly true when NASCAR comes to the Bristol Motor Speedway as area tracks try to take advantage of the larger than normal numbers of race fans in place.

This upcoming week will see the Kyle Larson Presents FloRacing Late Model Challenge powered by Tezos unsanctioned event under the umbrella of the Castrol FloRacing Night in America operation at the Volunteer Speedway in Bulls Gap as well as the Schaeffer’s Oil Spring Nationals/Valvoline Iron-Man Late Model Series co-sanctioned Lil Bill Corum Memorial at the Tazewell Speedway as the two big headliners.

I am certainly looking forward to both of those.

The Larson event promises to have a number of big names, including some from the world of NASCAR, racing for a lucrative purse on Thursday night. Those FloRacing shows are typically run in a very efficient manner which should have fans back home early enough that getting up for work the next day won’t be a major issue.

The Corum race also looks to have an outstanding field with big money on the line. And it’s always fun to watch the high speed action play out at ‘The Bad Fast Taz’.

Michael: Any big race at Tazewell where the big names come to race is always on my radar. Since losing their Lucas Oil date, Tazewell has put on the Bill Corum Memorial for the last couple of years. Last year’s race drew some big names, the names on the pre-entered list is an impressive one. Kudos to Tazewell Speedway owner Gary Hall along with Chris Tilley and Ray Cook for coming up with this race.

Volunteer Speedway should draw a good car count for the Kyle Larson race. There are two things I’m curious to see. One, how big of a crowd comes out for the race. Two, will any NASCAR drivers other than Larson and William Byron participate in the race. In the back of my mind, I wonder if this should have been a NASCAR driver only race like the Prelude to the Dream was a number of years ago at Eldora Speedway. There are some real opportunities for this event should this one be successful.