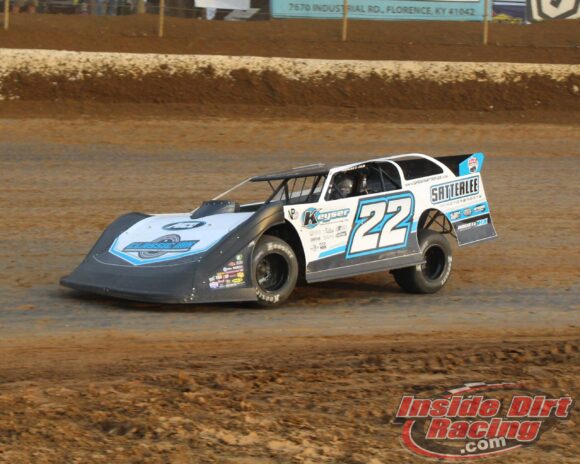 Gregg Satterlee had a very strong car on Sunday afternoon in the Lucas Oil Late Model Dirt Series event held at the Port Royal Speedway and very much looked like a contender of the win. However, his job was made somewhat easier when the leading cars of Kyle Larson and Earl Pearson Jr. were involved in a mishap just after the halfway mark that eliminated both from contention. From that point, the race belonged to the driver known as ‘The Truth’.

The Rocket Chassis driver from Indiana, Pennsylvania earned $10,000 for his win in the event shown live by MavTV Plus on the track located in central Pennsylvania.

Feature Re-cap: At the start of the 40-lap feature, it was Pearson who took the early lead with Larson, McCreadie, Sheppard and Erb trailing. On the second lap, Larson moved by Pearson to assume the race lead while Sheppard wrested third from McCreadie.

Satterlee moved into the top-5 during the race’s early laps then grabbed fourth away from McCreadie on the sixth lap. Further ahead, Larson and Pearson ran in tight formation while battling for the lead as they would throughout the feature’s first half.

By lap 11, Satterlee had moved in on Sheppard to challenge for third and that fierce battle would carry on for several laps. In the meantime, the lead duo of Larson and Pearson continued to run in tight formation as they caught up to the tail of the field.

At the halfway point, Satterlee was able to clear Sheppard for the third position as the fight up front between Larson and Pearson became even more intense. As that battle raged, Satterlee and Sheppard closed in on the top-two machines.

Pearson went low into turn three on lap 25 and the two cars raced into turn four side-by-side. There appeared to be contact and Larson went spinning in a portion of the track multiple drivers said that late afternoon visibility was limited to bring out a caution. Both of the early frontrunners went to the pit area for repairs with Larson eventually returning to the track while Pearson retired from the event.

When green flag racing resumed, Satterlee inherited the race lead with Sheppard, McCreadie, Erb and Winger in his tire tracks. Owens began to move forward as he passed by Winger for fifth on lap 38 then would get around Erb for fourth six laps later.

But in the end, it was Satterlee who would pull away and ultimately take the checkered flag in his home state. After finishing third on Saturday night it was the third career Lucas Oil Late Model Dirt Series victory for ‘The Truth’.