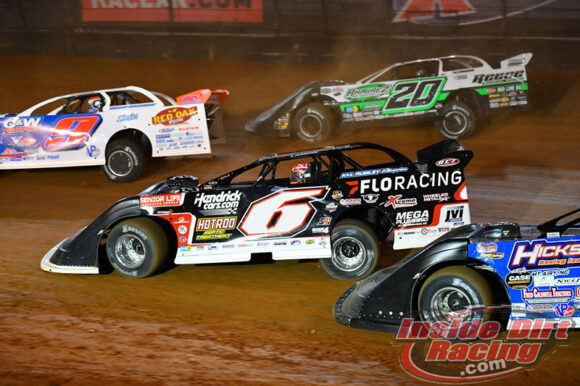 Thursday’s Kyle Larson Presents, FloRacing Late Model Challenge Powered by Tezos looks to draw a stellar field of Dirt Late Model competitors as some of the sport’s biggest stars have indicated that they intend to be on hand for the $20,000-to-win affair. At the same time, two of the biggest stars in the NASCAR Cup Series along with one of that form of motorsports’ most known personalities are expected to make appearances on Thursday evening at the Volunteer Speedway in Bulls Gap, Tennessee.

While regular fans of Dirt Late Model racing know the names of the top runners in their favorite form of racing, but in the grand scheme of things, dirt racing is a relatively small world. NASCAR, on the other hand, is followed by many with stadium-type venues and millions watching on television. The top drivers are known far and wide across the sports world with their races being highlighted on the most watched sports networks and other forms of media. While dirt racing fans tend to be quite loyal to their chosen brand of racing, their numbers do not match those of the fans of NASCAR.

During recent years, the two worlds of NASCAR and dirt racing have seen more and more crossover with each other. The shutdowns and restrictions related to the Covid-19 pandemic caused NASCAR to almost completely forego its usual practice and qualifying formats in favor of “feature only” shows. As a result, drivers who regularly compete in that form or racing had greater opportunities to race in other places and some chose to participate in dirt events.

In particular, Kyle Larson had been suspended by NASCAR during most of the 2020 season but was reinstated for 2021. Of all the drivers who took advantage of those opportunities, the Elk Grove, California native was the most prolific winning some of the most coveted events contested on clay surfaces. But others such as Stewart Friesen, Christopher Bell and even former champions Kyle Busch and Chase Elliott made a few appearances on dirt.

Whenever drivers such as those appear at a dirt track, attention is bound to follow. Whether it be in the form of fans who otherwise might have never attended a dirt race do so in hopes of seeing the stars they had seen on television or from a large grandstand up close and personal. More fans mean greater revenue for the track and helps to maintain the health of dirt racing.

Another aspect of having NASCAR drivers running in dirt races is the exposure provided to racers who can boast of beating those noteworthy competitors. A number of dirt regulars in all forms of the sport have mentioned beating Larson in their post-race interviews when they have had the opportunity to do so.

On Thursday night at the Volunteer Speedway, the added exposure that accompanies NASCAR stars will be in place as 2021 NASCAR Cup Series champion Larson will be entered in the race along with his Hendrick Motorsports teammate and the most recent Cup Series winner from this past Saturday night at Martinsville Speedway in the person of William Byron. Also, Fox commentator and former racer Clint Bowyer will be on hand to help call the action for FloRacing.com.

As stated above, dirt racing enthusiasts know the names of expected drivers such as Jonathan Davenport, Brandon Overton, Jimmy Owens, Chris Madden, Scott Bloomquist and Dale McDowell. But a new audience who may only be vaguely familiar with those names could get to know them after they either attended or tuned in because of the presence of Larson, Byron and Bowyer.

The idea of being exposed to a new audience is not limited to dirt racers. NASCAR has grown in its appeal within the dirt racing realm among some who had previously paid little attention. These types of appearances have caused some to tune in on Sundays to see how that driver they saw at their local dirt track might do in those events.

With NASCAR resuming practice and qualifying for the 2022 season, there will be fewer of these opportunities to have those drivers entered in dirt events. While some dirt racing fans are adamant in their disdain for NASCAR and vice-versa, the two forms of racing have obviously benefitted each other since 2020. Hopefully that can continue in the future. But either way, Thursday’s event at Volunteer promises to be interesting with such a solid field expected.