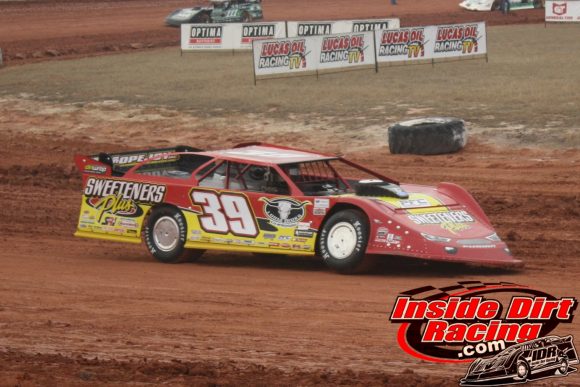 After rain eliminated the originally scheduled beginning of the World of Outlaws Late Model Series season last weekend at Georgia’s Screven Motor Speedway, the drivers and teams intending to compete on that tour descended upon the Volusia Raceway Park just outside of Daytona Beach, Florida on Wednesday to kickoff the 2018 campaign. At the end of the night it was Tim McCreadie who ended a streak of bad Georgia-Florida SpeedWeeks bad luck and came away with the first series trophy of the year when weather forced series officials to end the race just passed the halfway mark.

Tim McCreadie led the way in Group A time-trials and overall as he toured the clay oval in a track record time of 15.635 seconds. The Watertown, New York racer was followed by Chris Madden, Chase Junghans, Brandon Sheppard, Jason Fitzgerald and Brandon Overton in that group.

McCreadie carried his qualifying momentum into the first heat race of the night as he won that preliminary ahead of Darrell Lanigan and Rick Eckert while Madden took the second heat over Shane Clanton and Jason Fitzgerald.

Junghans topped the third heat with Chris Ferguson and Kyle Bronson trailing him to the finish line as Jimmy Owens won the fourth preliminary over Jonathan Davenport and Marlar.

Josh Richards won the fifth heat by beating Moyer and Hudson O’Neal to the checkered flag while Erb won the final heat of the night over Tyler Bruening and Don O’Neal.

Defending WoO Late Models champion Brandon Sheppard made his way into the feature by winning the first Last Chance Showdown of the night with Mike Maresca also earning a spot on the starting grid from that race. Devin Moran and Brian Shirley would make the feature out of the second LCS just before Mason Zeigler beat out Earl Pearson, Jr. in the final preliminary of the evening.

The WoO Late Models redraw placed Dennis Erb, Jr. on the pole with Madden, Owens, Junghans, McCreadie and Richards to follow him to the green flag in the main event.

At the start of the 50-lap feature it was Erb going to the early lead with Owens and Madden going side-by-side for second and holding each other up enough for Junghans and McCreadie to join the fray and make it four-wide. Just one lap later, Junghans moved to the high side of the track and swept around Erb to take the race lead with Madden, Richards and McCreadie trailing.

A lap 4 caution flag waved when Moyer slowed off the pace. The ensuing restart allowed Richards to draw alongside Madden as they raced for the runner-up position. One lap later, Richards took the spot away from Madden.

Tyler Erb slowed to bring out the night’s second yellow flag on lap 6. On the restart, Richards and Madden took the leader three-wide going into to turn one with Richards eventually emerging from that battle with the race lead ahead of Junghans and Madden. Madden then passed by Junghans for second but the Kansas driver took the spot back one lap later.

Meanwhile, Davenport began to move forward as he slipped into sixth and began to knock on the door of the top-5.

A caution for the crashed car of Fitzgerald slowed the action once again on lap 9. On the restart it was Davenport who made the big move as he jumped to 4th while Madden challenged Junghans for second.

McCreadie began to rumble as he took third from Madden on lap 12. Just two laps later the night’s overall fast qualifier took on Junghans and ultimately wrested the second spot away. At the same time, the leading car of Richards found himself in the midst of slower traffic which allowed McCreadie to close the gap.

McCreadie actually passed by Richards to take the top spot on the score board at lap 22 but a yellow flag waved for the crashed car of Lanigan before the lap could be completed and McCreadie had to surrender the spot.

Junghans swung up to the outside to go from third to first on the lap 22 restart. McCreadie then moved in to challenge Richards for second. However, another yellow flag waved at the halfway mark for Zeigler.

McCreadie took the lead on the lap 25 restart but another caution came out one lap later when Don O’Neal spun and was then hit by Tyler Erb.

The red flag was then displayed as visibility had become and issue due to fog. WoO Late Models officials allowed crew members to tend to their drivers with new helmets and/or tear-offs. After consultation with the drivers, series officials made the decision to end the race on lap 26 as drivers reported that they could not see with all the condensation building up on their visors.