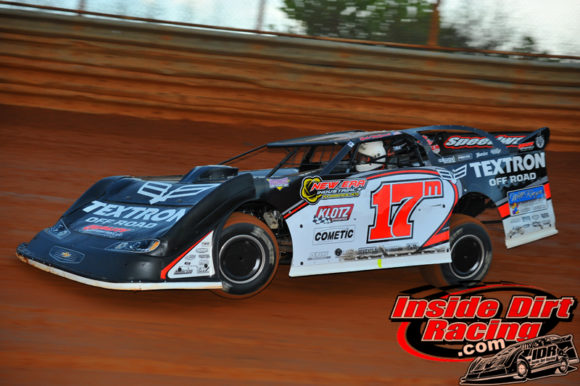 After fighting weather throughout the early season with two races rained out completely at Screven Motor Speedway last weekend and their Wednesday night feature cut short due to a heavy fog, the World of Outlaws Late Model Series once again took to the track at Volusia Raceway Park near Daytona Beach, Fla. on Thursday evening for a $10,000-to-win event. Dale McDowell came away from the speedway as the big winner on Thursday night after a hard fought battle with some of the sport’s top stars.

Scott Bloomquist proved to be fastest in Group A qualifying and overall after turning a lap in 15.766 seconds. He was followed by Jonathan Davenport, Mike Maresca, Jason Jameson, Chase Junghans and Don O’Neal.

Chris Madden had the best lap in Group B time-trials when he toured the track in 15.983 seconds to beat out Josh Richards, Timothy Culp, Dennis Erb, Jr., Mike Norris and Brandon Overton.

Bloomquist won the first heat of the night over Shane Clanton and Brian Shirley while Jameson won the second preliminary ahead of Brandon Sheppard and Davenport.

The World of Outlaws Late Models redraw placed Madden on the pole for the feature to be followed by Jameson, Richards, Bloomquist, Sheppard, Clanton, Overton and Norris.

Chase Junghans beat out Tyler Erb and Hudson O’Neal in the first Last Chance Showdown while Tim McCreadie topped Rick Eckert and Nick Hoffman in the final preliminary of the night.

Due to mechanical issues Richards started the feature in Donny Schatz’s Late Model but would have to surrender his third place starting spot.

At the start of the 50-lap feature, Madden jumped to the early lead with Jameson, Sheppard, Bloomquist and Overton trailing. Jameson moved to the outside of Madden as they contested the lead on the second circuit but the No. 44 held the spot. Soon after, Sheppard moved around Jameson to grab the second position.

Clanton split between Bloomquist and Jameson to take third on lap 4 but Bloomquist fought back on the next lap. On lap 8 it was Sheppard who went to work as he closed on Madden for the lead. The No. 1 car finally moved to the lead around the No. 44 on the tenth circuit.

Jameson had been shuffled back briefly but began to move forward again on lap 17 as he passed by Clanton to take fourth as Overton joined the fray to take fifth from Clanton. Bloomquist and Madden contested the second spot with Jameson closing quickly in the outside line as they raced in traffic.

On lap 22, Jameson moved to the outside of Madden for third. The two cars came together coming out of turn four with Jameson’s machine being forced into the outside wall. Jameson emerged from his damaged car with steering wheel in hand, which he then hurled at Madden’s car as the cars circulated under caution.

Eventually, both Madden and Jameson retired from the event with damage.

The race’s second half saw plenty of shuffling for position with Sheppard leading for numerous laps while McDowell moved into the mix to fight for position with the likes of Bloomquist, Clanton, Davenport and Overton.

On lap 37 the top-3 running cars of Sheppard, Clanton and McDowell raced in tight formation with Sheppard and McDowell on the low side of the track and Clanton employing a higher line. McDowell established himself firmly in second on lap 42 and then set off in pursuit of Sheppard.

On lap 44, McDowell took the lead while Bloomquist and Davenport battled over the fourth spot.

With two lap remaining, Sheppard closed back in on the rear spoiler of McDowell to make one last attempt to retake the lead but McDowell held firm on the bottom of the race track drove on to the checkered flag.