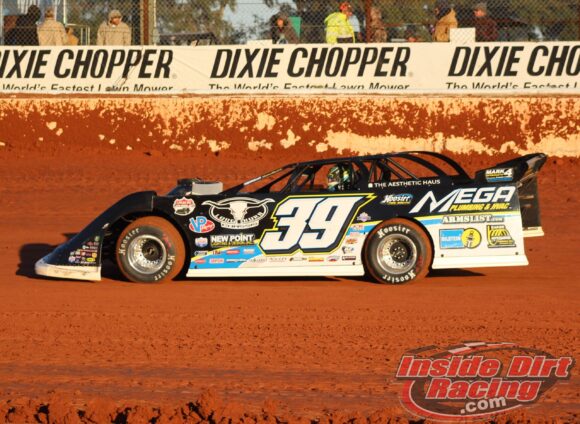 Tim McCreadie came into Sunday night’s Lucas Oil Late Model Dirt Series race at 34 Raceway looking for improvement and he definitely found that. After all was said and done in a race that ran caution free, the No. 39 machine had built a lead of almost 10 seconds. This race closed out a two-race weekend for the tour in the Hawkeye State after Saturday night’s event had to be pushed back one day due to rain.

The Longhorn Chassis driver from Watertown, NY earned $15,000 in a race held on the 3/8 mile track located in West Burlington, Iowa and shown live by MavTV Plus.

Feature Re-cap: When the 50-lap feature took the green flag it was McCreadie who went to the lead with Sheppard, Pearson, Alberson and O’Neal filling out the top-5. At that point, McCreadie began to pull away as much of the field ran in single-file formation around the inside of the track.

The track began to widen out and the first pass within the top-5 came on lap 31 when Pierce moved around O’Neal for fifth but O’Neal fought back and regained the position on the next lap. As the laps clicked off in an event that ran caution free throughout McCreadie built a lead of more than seven seconds,

In the end, McCreadie cruised to his second Lucas Oil win of the season and the 30th of his career as he crossed the finish line a half-lap ahead of second-place Sheppard who just held off a hard charging Pearson at the line.

“It speaks a lot for Longhorn Chassis,” McCreadie said in his post-race interview with MavTV Plus. “It hasn’t been easy for us this year. We’re working really hard, trying other cars that we have in the stable. We’re just trying to get better. Between Brandon(Sheppard) and the 44 Madden(Chris) they’ve made life tough on everybody right now. We’ve just got to keep improving. Tonight this car was spot on.”