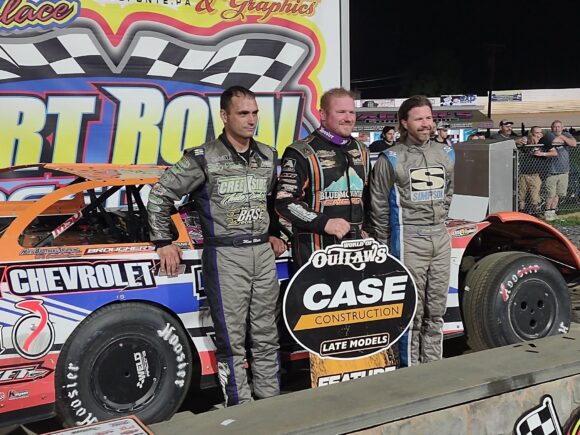 Jared Miley pulled off a bit of an upset when the World of Outlaws CASE Construction Late Model Series contested its third and final race of the weekend in Pennsylvania on Saturday night. Although it is in his home state, the driver of the No. 10 car had never won a feature at the historic Port Royal Speedway but that all changed on Saturday night.

The Rocket Chassis driver from Pittsburgh was awarded $10,000 for his efforts in a race held on the half-mile track located in Port Royal, Pennsylvania and shown live by DirtVision.com.

Feature Re-cap: At the start of the 40-lap feature Eckert charged to the front with Gustin, Clanton, Blair and Miley trailing. Miley quickly began his charge toward the front as he passed by Blair for fourth on the second circuit. At that point, eckert appeared to be in control as he began to pull away from the rest of the field.

Gustin and Clanton engaged in a fierce battle for the second position beginning on lap 7. Clanton’s efforts paid off on lap 8 when he took the runner-up position. Further back, Satterlee moved around Blair to enter the top-5.

Miley’s march continued on lap when he began a fight with Gustin for third. Three laps later he would take second away. Both Eckert and Clanton would fight back as they worked to regain lost ground. The top-4 of Eckert, Miley, Clanton and Satterlee ran in tight formation with slower traffic becoming a factor.

The first caution of the night came on lap 19 when Tyler Hershey stalled on the track. As soon as green flag action resumed, Miley began to harass Eckert for the top spot.

Miley claimed the top spot on the scoreboard on lap 21 while Satterlee moved in on Clanton for third at the same time. Almost immediately, Miley began to pull away from his pursuers building a lead of a full straightaway. Satterlee wrested second away from Eckert on lap 32 then Blair would push the former series champion back another position on lap 36.

But it was Jared Miley’s night as he sailed under the checkered flag to score the first World of Outlaws win of his career.

“I’m just totally pumped,” Miley told DirtVision.com following the race. “We’ve had a couple to get away from us on the last lap, one at Eriez and one at Thunder Mountain. If you had told me my first one was going to come here I probably would have never believed you because we’ve never won here before. We’ve started running better here this year. This is just awesome, it’s been a long time coming.”