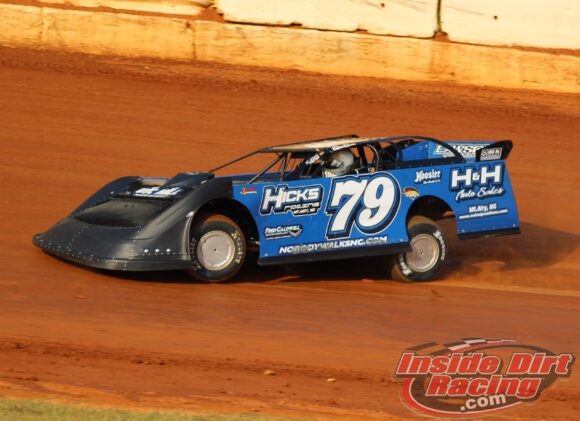 Ross Bailes was in the right place at the right time on Saturday night as he claimed the win in the Ultimate Southeast Series-sanctioned King of the Commonwealth at Virginia Motor Speedway. Just after he had passed Brandon Overton for the race lead, weather set in and would not allow the event to run its full distance. Officials were ultimately forced to declare the race complete as rain and lightning set in around the area.

The Longhorn Chassis driver from Clover, SC claimed a hefty paycheck valued at $20,000 for his efforts in a race on the half-mile track located in Jamaica, Virginia and shown live by FloRacing.com.

Feature Re-cap: At the start of the 60-lap feature it was Overton who took the race lead with Bailes, Watkins, Mitchell and Roberson trailing. The top-5 ran in single-file formation around the bottom of the speedway during the early going with Overton slipping away from the pack.

On lap 12 the No. 76 machine caught the tail of the field and began having to negotiate slower traffic. That allowed Bailes to close the distance that the early leader had built up. On lap 15, Bailes was right on Overton’s rear spoiler with slower cars now even more of a factor.

Overton found himself trapped behind the car of Dennis Franklin on lap 17. Contact between those two machines slowed Overton and damaged the nose of his car. Bailes seized upon the opportunity and swept to the race lead.

A yellow flag waved on lap 19 for the slowing car of Jeff Smith. Under he caution, Overton pulled into the pit area with a flat tire which dropped him to the tail of the field when he returned to action.

The race only briefly returned to green then another caution flag flew on lap 23 for a flat tire on Roberson’s car. At that point the rain set in and racing action never resumed. Eventually, officials called the race complete and declared Bailes the winner.