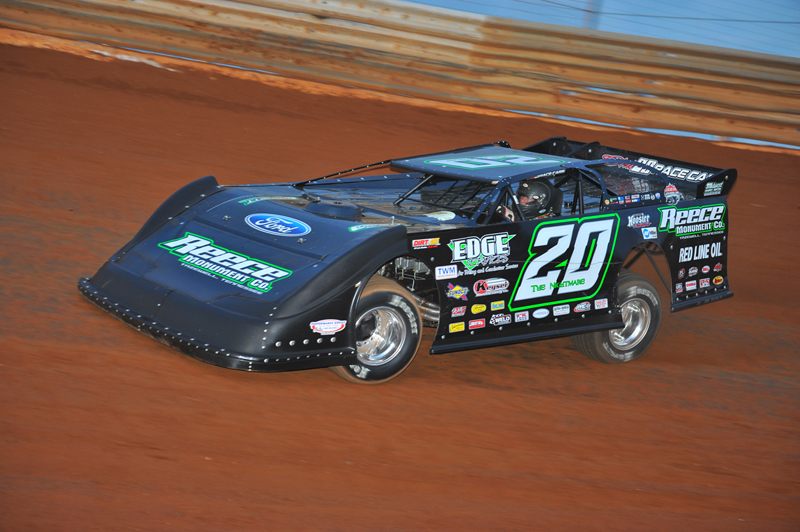 If you like lots of action with your dirt track racing, you would have been more than satisfied with all that went on in the Lucas Oil Late Model Dirt Series race at the Tazewell Speedway on Friday night. There were two red flags for roll over crashes within the first two laps of the feature followed by a thrilling late race battle for the win between two of the sport’s biggest stars.

Gary Hall’s super fast third-mile facility delivered what it is best known for in this event, thrills and spills.

Scott Bloomquist was the fastest in qualifying among the 21 Super Late Models to sign in for competition when he posted a lap of 11.150 seconds around the high-banked oval. John Blankenship and LOLMDS points leader Don O’Neal also earned pole positions for their respective heat races by setting the 2nd and 3rd fastest laps in time-trials.

The three heat races used to set the entire starting lineup for the feature race were won by Bloomquist, Jimmy Owens and O’Neal. Those results established a crowd pleasing front row of east Tennesseans Bloomquist and Owens in the main event.

The 50-lap feature got off to an auspicious beginning when the yellow, and ultimately red, flag waved as Jeff Wolfenbarger went for a wild, end-over-end ride at the entrance of turn one on the second lap of the race. Also collected, and heavily damaged, in that wreck were the cars of Josh Henry and LOLMDS regular Dennis Erb, Jr.

All drivers involved were reported to be uninjured.

The ensuing restart from that melee brought another disaster as several cars at the front of the pack got tangled in the middle of turns one and two. Clint Bowyer Racing driver Steve Francis took the brunt of the damage as his car rolled over one full revolution and ultimately landed back on all four wheels with a thud. Also caught up in that shunt were John Blankenship, Eric Jacobsen and Jason Papich. Each of those cars suffered varying degrees of damage.

Francis walked away from the crash but later reported some discomfort in his back via Twitter. 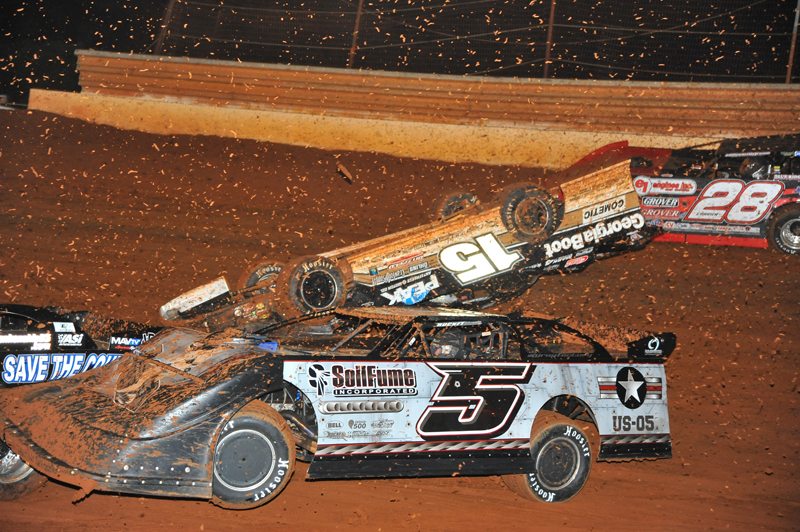 The car of Steve Francis rolls over during a lap 2 multi-car crash.

Another caution for a one car spin on lap 4 caused a brief interruption in the racing action, but things began to settle a bit after that.

Bloomquist established himself as the early leader with Owens and O’Neal trading the second spot after each of the early restarts. At the same time, tenth starting Chris Madden moved himself into contention by seizing the 4th spot away from Earl Pearson, Jr. on the eighth circuit.

Pearson went on to be involved in the race’s final caution on lap 15 when he found himself into, and then under, the lapped car of Bobby Mays.

On that lap 15 restart, Madden swept around O’Neal to claim 3rd while Owens applied pressure to Bloomquist at the front of the pack. Knoxville’s Billy Ogle, Jr. also began to make a move as he passed by Jared Landers to grab the 5th spot in the running order.

As is often the case on the tight Tazewell track, the lead duo found themselves having to negotiate traffic during the race’s second half. The slower cars allowed Owens to look both inside and outside of Bloomquist as the laps clicked away.

On lap 36, Owens was provided the opportunity he had been waiting for when Bloomquist went low to pass the car driven by Josh Henry. Owens swung his car high on the track through turns three and four as those cars went three-wide. Coming onto the main straightaway, Owens had the momentum and cleared Bloomquist to take the lead from the high side.

For the next several laps, Bloomquist attempted to return the favor, but eventually had to hold off the hard charging Madden for the runner-up position. Owens was ultimately able to pull away and score the victory. 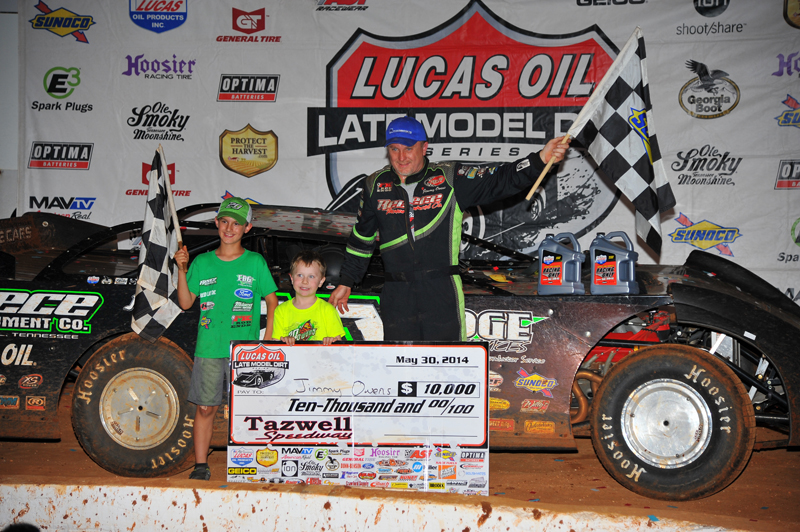 Owens in Victory Lane at the Taz.