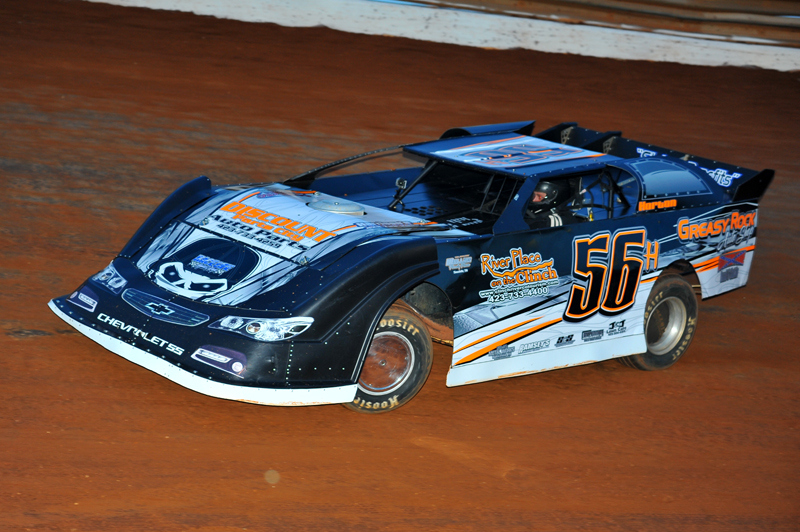 The Lucas Oil Late Models Dirt Series was the main attraction at the Tazewell Speedway on Friday night. But at the same time, most of the track’s regular weekly classes were in action to thrill fans with high speed racing action on the high banks.

In the Sportsman division, John Fields began the night by setting the fast time in qualifying with a quick lap of 12.379 seconds on the high banked clay oval. He was followed by Clyde Overholt, Jordon Horton and Heath Alvey in the starting order.

When the 20-lap feature race took to the track, the pole sitting Fields had troubles which placed Overholt in the early lead. Horton was able to get around the leader immediately after a lap 2 restart, but another caution flag flew before the lap could be completed and the pass was negated.

From that point, Horton would challenge Overholt for the top spot on the score board at virtually every turn for the next 16 laps. And while that battle for the lead was taking place, Jacob Owens trailed just behind the lead duo with Matt Shockley and Fields battling for fourth in his wake.

On lap 18 the persistent Horton was finally able to make his move stick and get around Overholt for the lead. He then drove away for the next two laps to claim the win.

At the finish it was Horton winning out over Overholt, Owens, Fields and Shockley.

*After the finish, Horton’s car was protested but he survived the protest and remained the winner.

Joe Keck started the Classics race from the pole with Philip Thompson alongside and Justin Overton and Matt Tharp just behind.

Thompson went to the lead as soon as the green flag waved over the 20-lap feature but Keck applied pressure. Tharp, Overton and Josh Chesney followed close behind the leaders in the early going.

The top-5 would remain in that formation for much of the way until Keck attempted to make a move in turn four for the lead with two laps remaining. The No. 78 machine bobbled in the attempt, which allowed Tharp to move into the runner-up position.

At the finish, it was Thompson taking the win over Tharp, Keck, Overton and Chesney.

*After the race, Thompson’s car was found to have the wrong casting numbers on the heads of his engine. Matt Tharp was declared the winner in Classics after his car survived a complete teardown.

Robbie Buchanan led the way in qualifying among the Modified Street cars with a lap of 13.313 seconds ahead of Brad Davis, Dakotah Knuckles and Tony Horton.

After a bit of trouble getting the feature underway due to a false start, some debris and an early spin, Davis went to the lead once the 20-lap race got underway. Knuckles, Horton and Buchanan gave chase to the leader throughout the first half of the event.

However, a caution would slow the action at the halfway mark as smoke poured from underneath Horton’s No. 56. That would set up a dash to the finish among the remaining four cars on the track.

Davis would lead the rest of the way by a relatively comfortable margin but the battle was for 2nd as Knuckles and Buchanan raced in a tight nose-to-tail formation around the third-mile speed plant. After the white flag waved, Knuckles and Buchanan went side-by-side out of turn two. The cars made contact and both went spinning into the inside wall. Neither would be able to make it to the checkered flag.

Davis was the winner ahead of Mitchell Burke. Knuckles was credited with 3rd and Buchanan with 4th.