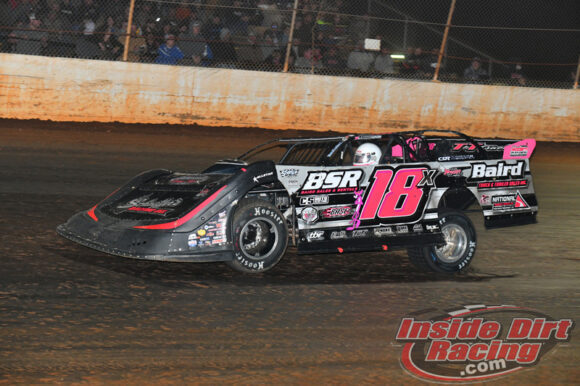 The 30th annual Ice Bowl feature for Super Late Model cars took the green flag on Sunday at the Talladega Short Track. At the end of the day in Eastaboga, AL it was Michael Page who scored the victory at the track known as the ‘Hornet’s Nest’. The Douglasville, GA driver earned $6,000 for his efforts.

Saturday’s preliminary action set the starting lineup for the first sixteen cars on the grid. Michael Page would start from the pole with Sam Seawright, Randy Weaver, and Dallas Cooper each winning heat races to earn starting positions within the first two rows.

Chad Thrash beat out Andy Picklesimer, Cass Fowler and Ahnna Parkhurst in the first B-main on Sunday afternoon then Matthew Brocato topped Landon Gentry, Daniel Richards and Justin Owens in the final B-main used to set the remainder of the starting grid.

After three attempts to get the 50-lap feature underway, it was Seawright who bolted to the early lead with Page, Cooper, Weaver and Todd Morrow trailing. Page moved in to challenge Seawright for the race lead on lap 5 as the top-3 of Seawright, Page and Cooper ran in very tight formation.

By lap 10 the leaders found themselves in heavy traffic on the bottom dominant track. On lap 15, Page again began to apply pressure on Seawright for the lead. Finally, on lap 21 that pressure paid off as Seawright bobbled while battling slower traffic allowing Page to take the lead.

Cooper rolled by Seawright to claim the runner-up spot on lap 22 then those three cars ran in tight nose-to-tail formation as they fought through slower cars. However, a caution for a spin by Thrash slowed the action on lap 34.

The top-5 running car of Morrow spun and received significant front end damage on the lap 34 restart with others getting collected in the mishap. The No. 07 car was retired from the event as a result.

Seawright rose to second on the ensuing restart and then began to apply pressure to the leader. But over the closing laps, Page was able to hold back the challenge and sail under the checkered flag for his fifth consecutive Ice Bowl victory.

“We didn’t really have a good car,” Page explained in his victory lane interview. “I went on the wrong right front and it wouldn’t think about turning.”

“Sam had the car to win. He did what I was going to do, but he did it,” Page said of Seawright’s move in traffic that cost him the lead. “He messed up getting into three because I was about to shoot to the top and try it. He though he’d better go but it wasn’t the right time to go. I can’t believe it. It’s crazy, this just don’t happen.”

Please also consider reading “Will Kyle Larson prove his worth in championship equipment?“