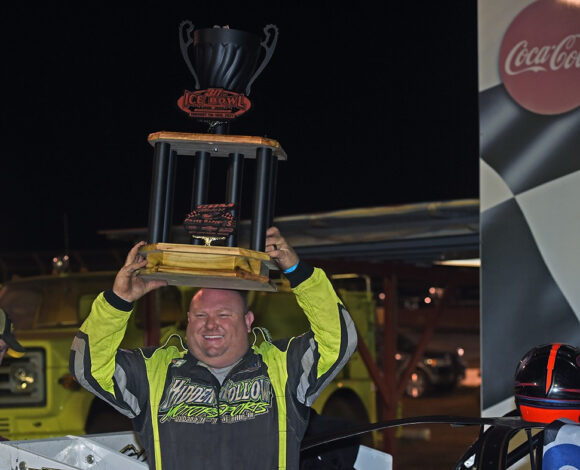 Dylan Knowles of Lanett, AL took the second spot in the K-Line Logistics Rocket and third went to Eli Beets of Knoxville, TN in the Beets Racing Special. Cody Overton of Evans, GA finished fourth in the Budweiser Special, and fifth was Jadon Frame of Decherd, TN in the Frame Racing Special.

Duke Blant of Carrollton, GA finished sixth in the Duke Racing Rocket and Tanner Collins of Franklin, GA was seventh in the Newnan Bonding Rocket. Cruz Skinner of Oxford, AL took the eighth spot in the Skinner’s Body Shop Rocket, and the ninth spot went to Chase Walls of Decherd, TN in the Powers Machine Special.

In preliminary action on Saturday, Knowles set fast time honors among the 49 entrants in Boyd Built Fabricators Group Qualifying with a lap around the 1/3-mile clay oval in 14.774 seconds. Knowles then won the first of four ten-lap KRC Power Steering Heat Races to earn the pole position for Sunday’s main event.

The other three KRC Power Steering Heat Races were won by Beets, Jake Knowles of Rome, GA in the Knowles Race Parts and Bodies Special, and Welshan. On Sunday, the three KRC Power Steering B-Main Races were won by Riley Hickman of Cleveland, TN in the Competition Race Parts Special, Monte Skinner, and Drew Kennedy of Lansing, TN in the Schubert Monument Sales Rocket.

Welshan took the lead at the drop of the green flag from his outside front row starting spot followed by Dylan Knowles, Beets, Jake Knowles, and Overton. The 24-car field settled into the sweet spot in the bottom groove of the track that saw a total of over 320 race cars in eight different Divisions compete on the surface during the four-day event.

By the eighth tour, Welshan began to encounter the cars on the tail end of the lead lap. That enabled the top second through fourth-place cars to close in on the leader. Donald Johns of Summertown, TN spun on the backstretch on lap 12 right in front of Welshan. Welshan was able to get by without any contact, which earned him the VP Racing Lubricants Slick Move of the Race Award.

A multi-car tangle on the restart as drivers starting on the outside tried to wrestle their way to the sweet spot of the track in the bottom groove brought out the red flag and took out the Car Smart Auto Sales Special of Elliott and the George Racing Special of George. The next restart was a single-file affair.

After the restart, Welshan continued his domination of the race, pulling out to a full straightaway advantage over Dylan Knowles. That big lead was erased when the caution flag came out on lap 22 when Jake Traylor of LaGrange, GA stalled the Traylor Racing Special on the front straightaway.

Welshan led Dylan Knowles, Beets, Jake Knowles, Overton, Frame, Duke, Collins, Cruz Skinner, and Walls down for the restart. Jake Knowles stalled on the backstretch and out of the fourth spot on lap 25 to bring out the fourth and final caution flag of the race.

After the restart, Welshan reached the last car on the lead lap, Jody Knowles of Tyrone, GA in the Clayton Signs Special. A driver could move out of the sweet spot of the race track to attempt a pass, but to do so would be done at their own peril. Welshan stayed behind Jody Knowles for the final ten laps of the race and took a .700 second margin of victory under the checkered flag.

Round 2 of the 2021 Crate Racin’ USA Winter Shootout Series will be on Thursday night with a $1,500-to-win race at Volusia Speedway Park in Barberville, FL. It will be the opening race of the 2nd Annual Sunshine Nationals with a $2,000-to-win race on Friday night, and a $10,000-to-win race on Saturday night.