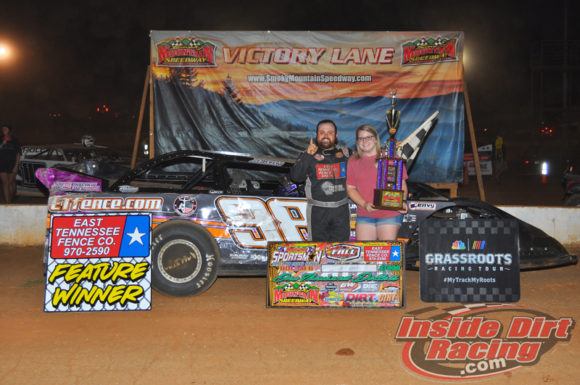 Many drivers would be thrilled with a season that has produced four feature wins up to this point. And certainly, Jed Emert isn’t disappointed with those wins, but the Maryville, Tenn. racer is relentless in his pursuit of excellence and that spurs him to strive for even more. The Sportsman Late Model regular on the tracks of the east Tennessee region is always looking to provide fans and his Steve Ritchey Racing team with his best effort and he isn’t satisfied when he doesn’t think that is the case.

This past Friday night Emert scored his third win of 2019 at Smoky Mountain Speedway and his fourth overall victory of the season. The No. 98 machine also visited victory lane earlier this year at 411 Motor Speedway.

Emert points out that team owner Steve Ritchey acquired a new car for this season and there have been a few growing pains as the operation has worked the GRT machine into shape.

“Steve got this car last winter,” Emert explained in an interview with InsideDirtRacing.com. “It was Skip Arp’s old car and the problem with it is that there were only five or six that were made in that year model so, quite literally, we have one of five or six cars in the world. When we’re good, we’re by ourselves on an island and better than everybody. But when we’re bad, we don’t have any help.”

And those ups and downs have made for some trying times and some exciting times.

“It’s been tough,” Emert continued. “We’ve had moments when I thought we had it figured out and then we show up at the race track and we’re not that good. We’ve got four wins this year. We’ve run really good at Smoky Mountain where we’ve finished first or second in five of the six races we’ve run there. But I don’t feel like we’re where we need to be yet.”

The 25-year-old driver believes that there have been several factors to lead to this season’s success at Smoky Mountain. But he is quick to mention that he enjoys other tracks in the area as well.

“I think it’s the way the race track has been this year, it’s had a lot of different characteristics,” Emert said. “I feel like it’s the best it has raced in years as far as you being able to move around. The way the race track is shaped so different on both ends it’s been good for me to get a feel for the race car and figure out where I need to be better. I don’t necessarily know what it is about it but I just like that track a lot and I feel like I get around there pretty well. I love 411 and Bulls Gap but Smoky Mountain is home and I think that’s part of it too.”

Those ups and downs associated with this season have caused frustration for both driver and car owner. In order to regroup for the second half of the campaign, the two men agreed to take a little time away from the race track in order to find a fresh outlook. Based on recent results, it appears as if that was the right move.

“Me and Steve had to take two weeks off about a month back because we were so frustrated that we couldn’t figure anything out,” Emert recalled. “We’d feel better and think everything was okay then we’d come to the race track and it wouldn’t react the same. Talent-wise I feel like in my heart that I can race with anybody so when we’re not getting it done it frustrates me. And for Steve, from the car owner’s perspective, it frustrates him because he’s the one that poured money into buying a new race car. Taking that time off let us clear our minds so we could start over and now the past four weeks have been much better. That win Friday was like a guerrilla fell off our shoulders.” 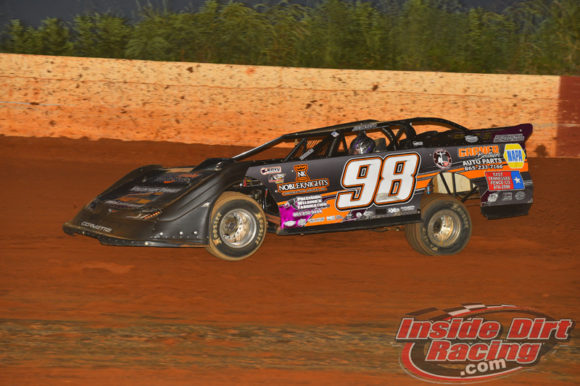 Learning the dos and don’ts for a new car requires work. And sometimes that work involves more than just turning wrenches in the shop. Often times, developing and on-track feel is the only way to break a maverick machine. But that feel can’t always be found on a race night alone.

“We’ve gone and tested a little bit but the problem is when you start from scratch you don’t know which end of the race car to go work on,” Emert described. “I’ve talked to more people, more friends, more people in the industry, and watched more video than I ever have to try to find ideas of what I need to look at next. It’s tough because I think I probably drive different than anybody else I race with so to get the feel of the race car that I think I need takes a whole different deal from what everybody else does.”

Emert and Ritchey are among two of the most popular people in east Tennessee pit areas. And the effort they have put into winning races is ultimately for the friends, family and fans who support them.

“They’re a big part of what makes it work for me. My mom used to say when people would complement her on how me and my sister acted that it takes a village and that’s kind of the way it is in racing. It’s not just me and it’s not just Steve. It takes every person, whether they realize it or not, to make it go. And that’s why I usually bring my village with me to the races. That’s why I always stay there forever taking pictures because I want to make sure they get that moment. I try to appreciate every win as much as I can.”