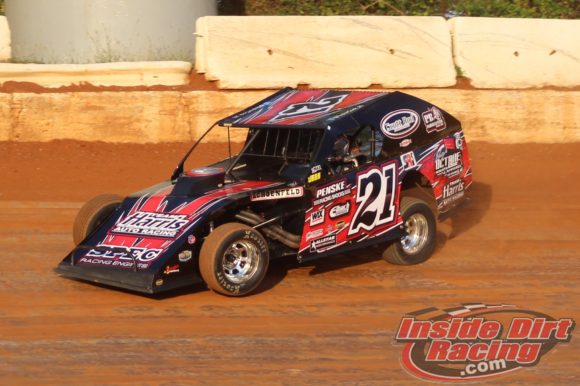 In the end, Taylor Cook made his first ever visit to 411 Motor Speedway count as he scored the Modified victory and collected the $1,000 first prize.

These updates are brought to you by Smoky Mountain Speedway in Maryville, Tenn. The next event coming to SMS will be the Southern All Stars sanctioned ‘King of the Mountain Classic’.

This will be the sixth feature of the season for the Iron-Man Modifieds. So far in 2019, Tyler Nicely, Clayton Miller, Ryan Ayers, Ricky Arms and Ricky Tinch have earned feature wins with Miller having pulled into victory lane twice. This will be the first of two scheduled stops at 411 for this tour.

Taylor Cook was fastest among the 24 cars to make a qualifying attempt in the Iron-Man Modified class with a lap of 15.485 seconds around the 4/10 mile clay oval. That time beat out Clayton Miller, Jeff Hamby, Ricky Tinch, Blake Brown, Jamie Mosley, Jesse Rupe, Amos Bunch, Josh Henry and A.J. Garber.

Cook bolted to the early lead at the start of the 20-lap feature with Miller, Tinch, Hamby and Brown following. A lap 2 caution for the stalled car of Billy Palmer slowed the action and set up a restart.

Cook continued to lead over Miller when the action resumed while Tinch, Hamby and Brown battled furiously for the remaining spots in the top-5.

Eventually, Hamby would get by Tinch on lap 9 to take third.

A two-car incident involving Josh Henry and Kirk Turner was responsible for the second caution of the night on lap 10.

Cook again held the top spot once the racing action went back green. However, Miller’s hold on second was very much in jeopardy as Hamby challenged for the spot over the entire second half of the event.

Ultimately, Cook drove his No. 21 ride under the checkered flag in his first ever visit to 411 Motor Speedway. 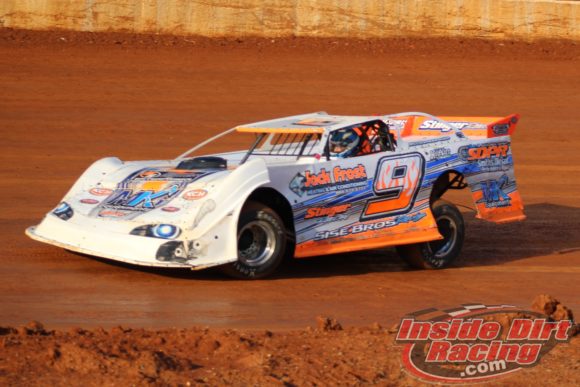 Jesse Lowe will enter the night’s action as the current leader in the 411 Motor Speedway standings for the Crate Late Model division ahead of Rusty Ballenger, Trevor Sise, Jason Cardwell and Terry Poore. Lowe has captured five feature wins so in 2019 on ‘Tennessee’s Action Track’.

By night’s end it was Zach Sise who celebrated the win.

Zach Sise would take the green flag for the feature from the pole after he led a field of nine Crate Late Models who took a lap in time-trials by posting a lap of 14.834 seconds around the 4/10 mile clay oval. That time beat out the efforts of Trevor Sise, Brandon Miller, Brad Lowe, Rusty Ballenger, Clay Coghlan, Jed Emert, Jake Whitehead and Josh Henry.

There were no heat races as the feature lineup was set based on qualifying results.

Zach Sise took the lead at the start of the 25-lap feature with Trevor Sise, Lowe, Coghlan and Miller trailing. However, the brother act at the front of the field would be short lived as Trevor Sise slowed and pulled off track at the end of the second circuit.

The top-3 of Zach Sise, Lowe and Miller pulled away and appeared to be in position to settle the matter among themselves. But Lowe made hard contact with the outside wall at the exit of turn two on lap 8 to bring out the first caution of the night.

That left Sise at the front of the pack with Miller, Coghlan and Ballenger just behind.

From there, Sise led the way in front of a battle for second that saw Miller make several attempts to get inside of Coghlan but was never able to make the pass.

Even though Coghlan and Miller closed on the leader late in the going, Sise was able to cruise under the checkered flag for the victory.