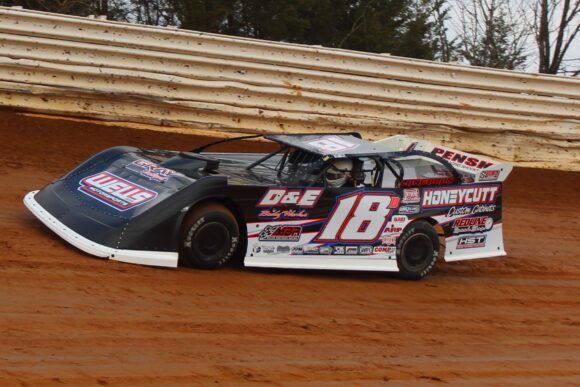 The Longhorn by Wells car for Daulton Wilson

Those who keep a close eye on Dirt Late Model racing have likely noticed that Fayetteville, NC racer Daulton Wilson has been among the fastest drivers around through the late fall and early winter months. After taking much of the early portion of 2020 off to prepare a new car and engine, the 23-year-old has made a strong return as the calendar year winds down.

After earning Rookie of the Year honors on the Ultimate Southeast Series in 2019, Wilson decided to revamp his racing operation. When racing shutdowns occurred due to the coronavirus pandemic, the driver and his Wilson Family Racing team were provided with ample time to make sure his new Longhorn by Wells chassis was ready.

Wilson’s new engine comes from a place well acquainted with horsepower. Gray Motorsports is perhaps best known for producing drag racing power plants like those that carried Tanner Gray to an NHRA Pro Stock championship in 2018. After rebuilding an engine for Wilson’s brother, Gray Motorsports expressed an interest in building a new one for him as they were already providing power for Sprint Car competitors.

“It worked out really good because I actually picked my new car up in April and that was about the time everything was really shutting down,” Wilson explained in an interview with InsideDirtRacing.com. “Then I got started on building a new motor and racing got going back. We ran this car for the first time at the beginning of August and that was about the time everything got going back to normal, I guess you could say. We ran a few races with my brother’s super motor just to get going. Once my new motor was done, we’ve raced it pretty heavy. We got started a little late to put my own stuff together but it’s been going pretty good since we got the new car and motor together.”

Wilson comes from a racing family. His mother and father, Rhonna and Joel Wilson, had been involved with Dublin(NC) Motor Speedway from the time their son was young. It was this family connection that led to the desire for him and brother Ethan to become Late Model drivers.

Early in his career, Daulton Wilson drove at Dublin as well as Fayetteville(NC) Motor Speedway and County Line Raceway in Elm City, NC.

“My mom and dad worked at a race track,” Wilson pointed out. “They had what they called a Young Guns class for kids 10-14 years old to get started racing. That’s where we got started and we raced our way out of that class and worked our way up to Pure Stock, Super Street and Limited Late Model. Last year I got an opportunity, Randy Clary provided me with a super motor, to get out on the road and get my feet wet super racing. We were fortunate with that and got in a full year of getting out on the road and travelling a little bit.”

“Me and my brother are together all the time even if we’re racing together or if we’re not both racing you’ll see us both there, I’m working on his stuff or he’s working on mine,” Wilson said. “Our mom is there all the time but my dad doesn’t go with us as much anymore. But he got us going when we were growing up. It’s a family deal. My girlfriend is always there and my cousins go when they can.”

The young driver found success early on by winning the Pure Stock track championship at Dublin in 2010 then the Limited Late Model title at that same venue in 2014 and 2016.

Now, Wilson hopes to find success racing further from home. And he has done that over the past few weeks. After qualifying third in his group in ‘The Last Call’ at The Dirt Track at Charlotte he went on to finish second in his heat race and 13th in the feature in the first night of World of Outlaws Morton Buildings Late Model Series action near NASCAR’s Charlotte Motor Speedway.

“I want to run in those big races,” Wilson insisted. “That’s the best in the country and that’s how you see where you line up. I’ve always had that mentality and that thought process that if you want to be the best you’ve got to race against the best to know where you really stand up against them. It worked out that I didn’t race a lot in the season so when this Drydene deal came along, I’ve got fresh equipment to go race against the best.”

Wilson decided to take on the Drydene Xtreme DIRTcar Series this winter and quickly made his presence known. However, after crashing his car in a race prior to the series opener, the Blue-Gray 100 at Cherokee Speedway, the driver found himself behind the wheel of the Billy Hicks-owned No. 79 at the Gaffney, SC track in a one race deal.

Wilson would ultimately finish the feature in 8th at Cherokee.

“It was an awesome opportunity and I’m very thankful for Billy to come along and offer that to me,” Wilson said. “It was just kind of a perfect storm that week because I had been at Modoc the week before and got in a wreck on the first lap and tore my car up pretty good. It was going to be a challenge to get everything back together for Gaffney to start the Drydene deal.”

A recent breakup led to Wilson’s opportunity at Cherokee. Ben Watkins had been driving for Hicks but the two opted to go their separate ways in the week leading up to the Blue-Gray 100.

“Ben and Billy had parted ways that Monday,” Wilson recalled. “Billy already had everything ready to go racing and had planned on that being his last weekend of the year anyway. He asked if I would be interested in driving his car that weekend because he had noticed that I had got my car tore up pretty bad and his stuff was ready to go so it just worked out perfect. He needed a driver for the weekend and I needed a car for the weekend.” 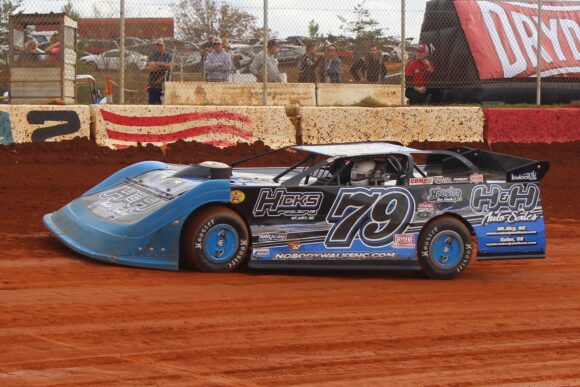 Wilson drove the Billy Hicks-owned No. 79 to an 8th place finish at Cherokee

Both Wilson’s own car and the Hicks machine are Longhorn Chassis rides. Wilson has come to like the feel of those cars. His own chassis came from the shop of Kentucky-based Wells and Sons Motorsports. That organization fields a full-time ride for driver Brandon Overton.

“I drove a Longhorn in 2016 for Corky Williams and we were always fast in that car,” Wilson recounted. “We had always had MasterSbilt stuff of our own. After I got back in my own stuff I kind of compared my race cars to that Longhorn so this year when I decided I was going to sit out until I could put together what I wanted and what I felt like was the best combination, I knew it was going to be a Longhorn. I had built a relationship with Brandon Overton and Wells and Penske Shocks so everything fit together for me to go in that direction. The Longhorn definitely fits my driving style.”

Wilson established a new track record in qualifying for the second Xtreme race at the Volunteer Speedway in Bulls Gap, TN before posting a 6th place finish in the feature in his own No. 18D Longhorn.

“That was only my second time of ever even seeing Bulls Gap,” he declared. “The first time when we were there last year we were terrible. I think I had to take a provisional to get in the race and we just weren’t good at all. I didn’t have very high expectations at all, really. I knew my car had been pretty good but that was only the second time I had raced in Tennessee. We chose the wrong tire there for the feature, but all in all, it was a good outing.”

Please also consider reading “Will single-driver domination of the power organizations last beyond 2020?“

He then went on to score a 4th place result in the third race at Georgia’s Lavonia Speedway. He currently sits third in the overall Xtreme DIRTcar Series standings behind Chris Madden and Kyle Strickler

Beyond his current venture, Wilson will race when and where the situation is right.

“Right now, we’re just going to do a pick-and-choose deal because I’ve only got one motor and the engine won’t go a full season without having to be refreshed when you’re following a series. We’re just going to go to the races that make sense for me. Being from Fayetteville, it’s a pretty good trip just about anywhere you want to race supers. If we’re able to catch somebody’s eye and get some more funding behind this deal where we could get a second engine, obviously, we’d be able to race a whole lot more. But it’s just going to be a play it by ear and go with whatever fits.”