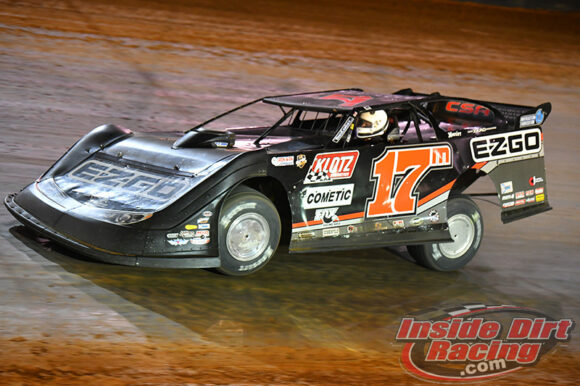 Dale McDowell won a Dirt Late Model race at Bristol Motor Speedway in 2000 and on Saturday night at the Tennessee track he repeated that feat in the Karl Kustoms Bristol Dirt Nationals finale. It ended the four-race XR Super Series run at the dirt covered NASCAR track.

Feature Re-cap: Prior to the start of the 50-lap feature Larson pulled off the track with what was reported to be a broke throttle pedal. When the race started, Weiss jumped to the lead with Strickler, Whitener, Ferguson and McDowell in his tire tracks.

A lap 2 caution for the slowing car of Overton immediately slowed the action. On that restart, McDowell moved up to third with Bloomquist coming up to fourth. At the same time, Madden came up to seventh from his 12th starting position.

McDowell moved into the runner-up spot on lap 8 when he passed by Whitener. The No. 17m car then set off after the race leading car of Weiss. McDowell closed the gap on 17 as he pulled right onto the rear spoiler of the earlier leader. Those two cars were pulling away from Whitener, Bloomquist and Strickler who ran in positions 3-5.

A lap 32 yellow flag waved when Moran tagged the outside wall. On the restart, Strickler, Bloomquist and Weiss went three-wide for third after Whitener had moved up to second.

Weiss slowed on lap 35 with a flat tire. McDowell again bolted back to the lead on the restart as Madden jumped up to third leaving Bloomquist and Ferguson to fight for fourth after having passed Strickler.

The final caution came on lap 37 when Strickler stopped on track. Madden and Ferguson went to second and third on that restart but McDowell got away quickly.

Ultimately, the veteran driver sailed to victory just as he had on this track back in 2000.