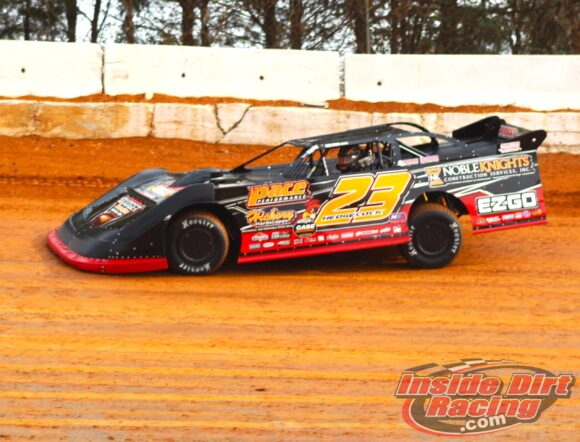 Cory Hedgecock on his way to a Leftover win at 411

Cory Hedgecock always has to be counted as one of the favorites going into a racing event at 411 Motor Speedway and Saturday afternoon’s 7th annual Leftover proved to be no different. The No. 23 car took the lead just before the halfway mark then led the way by cutting through slower traffic for the rest of the way.

The Black Diamond Race Cars driver from Loudon, Tennessee earned $5,000 for his efforts in the race held on the Seymour, Tennessee track.

Feature Re-cap: At the start of the 40-lap feature it was Brooks who roared out to the early lead with Hedgecock, Oliver, McCarter and Chilton trailing. As the cars crossed the finish line to completed the first lap, the top-3 of Brooks, Oliver and Hedgecock were in three-wide formation with Brooks eventually coming out on top ahead of Oliver and Hedgecock.

On the second circuit, Hedgecock moved around Oliver to briefly assume second place but Oliver quickly fought back to regain the spot. But on lap 4, Hedgecock would finally claim the position while Oliver fell back into a battle with McCarter and Chilton at the back of the top-5.

McCarter and Chilton moved to third and fourth respectively on lap 7 shuffling Oliver back to fifth.

Hedgecock took to the high side of the track and began harassing Brooks on lap 12 at the same time Chilton and Erwin began fighting for fourth. As the lead duo worked through traffic, Hedgecock eventually took the lead on lap 16.

Top-5 running Erwin spun on lap 21 to bring out a caution. On the ensuing restart, Emert began to move forward into the top-5 by employing the low side of the track. Meanwhile, Hedgecock looked as if he would take complete control of the race until another yellow flag waved on lap 24 when Chase King spun.

McCarter moved to second on the lap 24 restart. One lap later, Emert took third away from Brooks. Meanwhile, Hedgecock began to slip away from his pursuers, even as slower traffic became an impediment.

Ultimately, Hedgecock would sail under the checkered flag to score the victory.

Click the play button below to listen to our post-race interview with Cory Hedgecock: