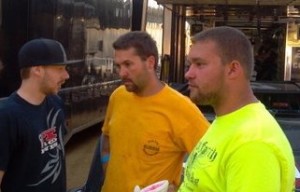 Crew chief Chris Fox(center) says that planning is the key to success.

Jimmy Owens entered a total of 57 feature races in 2013, most of those well away from his Newport, Tenn. shop. And that does not include the times in which his Mike Reece owned team ventured to a race track only to be rained out.

All of the effort involved in such an endeavor paid dividends as the team won a total of 11 races and collected their third consecutive Lucas Oil Late Model Dirt Series championship in the process. But at the same time, the travel, preparation and competition can take a toll on those involved in racing on a national touring series.

The man in charged with calling the shots for Owens and seeing to it that the No. 20 Bloomquist Race Car is prepared for all of those races is Owens’ crew chief and cousin Chris Fox. And according to the team leader, having a plan is the key to success.

Often there is very little time to complete the week to week turnaround required for following a national touring series such as the LOLMDS. With that being the case, every available minute has to be used wisely as many trips require the team to leave out on Thursday and not return until Sunday.

“You’ve got to get after here at the shop,” Fox pointed out in a recent interview. “We start out washing everything up on Monday morning and try to get done by early evening. Then we start our maintenance program, going over all the nuts and bolts, run the valves on the motor. We want to check the motor to be sure the it’s in good shape on Monday in case we do have a problem so we can get it taken care of because we’ve usually only got until Wednesday to get everything done.”

After the washing, bolt checking and engine maintenance of Monday are completed, the crew’s attention can be focused elsewhere. Tuesday is the day appointed for taking care of their home away from home. “We go through the truck on Tuesdays to replace anything that we might have used up on our last trip and to be sure everything is where it needs to be.”

After the hauler is replenished, the crew’s attention is turned back to the cars. “We also do any sheet metal repairs that are needed on Tuesdays,” Fox said.

While the plan remains consistent throughout much of the season, there are some weeks in which special emphasis is placed on preparation for an upcoming event. 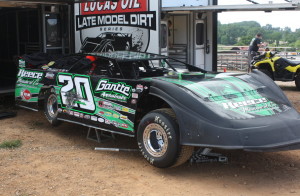 By the time Jimmy Owens’ car gets to the track, hours of preparation have been put in.

“Every week is pretty much the same preparation, but you know the tracks you run good at and the tracks that you struggle at over the years, so you kind of go by that,” Fox explained. “Anybody would be foolish if they say they didn’t have it in their head that they feel like they had a better chance of winning at a certain place than not. We go to every race trying to win it, but some places we feel like our chances are greater than others.”

Fox believes a mid-summer trip in 2013 for a race not on the Lucas Oil schedule took its toll on the team. “Last year, we went up to Wisconsin(USA Nationals at the Cedar Lake Speedway) and that put us a little behind because we had two big Lucas shows(North/South 100 & Topless 100) on consecutive weekends right after that.”

Owens’ preliminary schedule posted on his website does not have the USA Nationals listed as an event the team plans on attending this season.

“A guy told us one time, ‘when you get a weekend off, you better take it’,” Fox recalled. “On a weekend off, you’ve got to take a break and do something fun because you’re on that road so much and it’s such a grind that you’ll get burned out. But everybody asks you to come here and come there and you feel bad for not going, but we can’t because we’re trying to get everything caught back up.”

But sometimes, taking those weekends off can come with a drawback.

“I think this year when we get a weekend off we might just look into staying home,” Fox explained. “And we hate not to go to some tracks because the local fans here where Jimmy grew up racing want to see him race, and they hardly ever get to see him race anymore because the Lucas shows are hardly ever around here. You want to race for your local fans because they supported you on the way up, but it’s hard for us to do.”

To be successful at anything, it is essential to have a plan. Chris Fox and his team have a plan for their day to day operations that obviously works. After all, Jimmy Owens has won three consecutive Lucas Oil Late Model Dirt Series championships by sticking to the plan.

This was the second of a two part series. Please also read Chris Fox explains how off season work leads to success for Jimmy Owens.