Inside Dirt Racing ran a recent blog on a discussion about tires in dirt late model racing. The blog drew quite a response from a number of people, including from someone with one of the national series.

Rick Schwallie, who is the Assistant Series Director for the Lucas Oil Late Model Dirt Series, read the blog and responded. He wanted to share with us the ins and outs of the tire game and the series’ decision to implement their tire rule last season.

“I’ve learned a lot in the past couple of years that blew my mind,” Schwallie said via text. “There is so much more that goes on that I’d like to share.”

For those that do not remember, the Lucas Oil series implemented a new tire rule for the second half of the season in 2013. The rule limited the number of compounds a team could run and also limited the brand choice to Hoosier only.

Initially, drivers running American Racers were not receptive to the rule. A number of AR drivers opted to skip Lucas races shortly after the rule was put into effect. 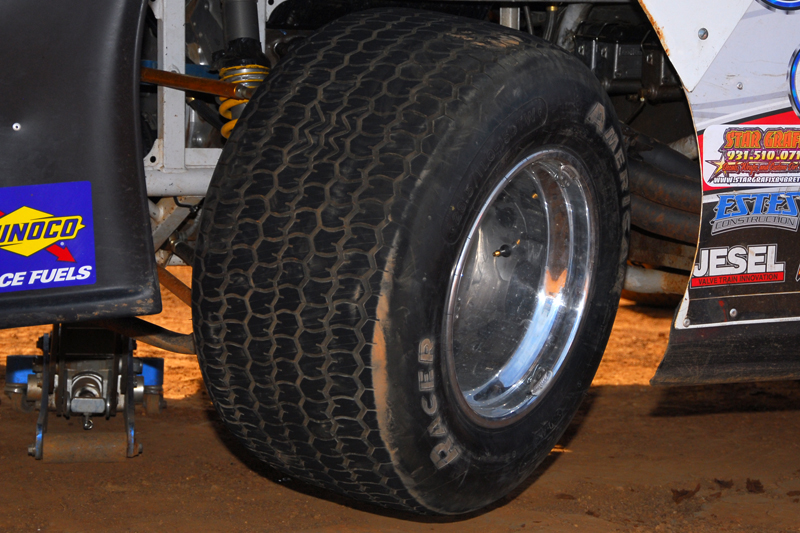 Schwallie said there were a number of reasons Lucas decided on the tire rule, but one stood out among the others.

“The main reason for the tire rule was the endless choices and several different constructions of right rear tires by both Hoosier and American Racer,” Schwallie stated. “As an example, for a Hoosier LM1600, there are as many as 17 different choices based on the construction of the tire. Any of our racers had to carry every one of those different constructed tires because one construction might be best for one track and run a different type of construction for another track we’d run the next night.”

“That made it hard for the local and regional racers to compete because they weren’t going to buy so many tires on the chance one of them would be the best one for that night. We finally decided enough was enough.”

The early perception of the Lucas tire rule was to get car counts higher from the regional and local racers. Schwallie said all drivers wanted some type of tire rule.

“All racers wanted something to be done,” Schwallie said. “Our drivers came to us and asked us to come up with something because the choices were getting out of hand.”

And the decision to disallow American Racers was purely to get the drivers on a level playing field regarding compound types.

“American Racer did nothing wrong,” Schwallie stated. “They were very understanding when we put the tire rule into place. It makes it easier for a single brand to be involved. The competition between Hoosier and American Racer is such that both were constantly making changes to compete with each other that it became costly for the racers to keep up.”

Initially, race teams wondered if the new tire rule would save them money. That seems to be the case for teams just running Lucas races.

“In the beginning, the teams wondered if it would save them money,” Schwallie said. “If our drivers race for another series when we have time off, they still need the tires those series allow. So it won’t save them in those situations. But what is different now is you’ll find tire racks only being around 30% full for our races. If a driver races with us on a weekend, they don’t need all those other tires. So they can take them off the truck. And they’re not using tire carts either.”

After some initial skepticism, the tire rule has been widely embraced by most competing with the Lucas Oil Late Model Dirt Series.

“There has been a lot of support for the tire rule once people studied it and understood what we were trying to accomplish with it,” Schwallie said. “It’s been a year of learning for us as a series and for the drivers. As much as some said this would really affect our car counts, I looked back on our records from the previous year and we were off by one car on average for the year. I think that shows the support the drivers have for the rule.”

On Wednesday, the National Dirt Racing League announced a tire rule for the upcoming races at East Alabama Motor Speedway and Smoky Mountain Speedway. The rule is also Hoosier only and has a limited number of compounds allowed. Kelley Carlton, the series director for the NRDL, echoed the concerns teams have over the unlimited choices of tires.

“Many of the teams that are committed to the series individually expressed concern over a completely open tire rule,” Carlton said. “The amount of tires and wheels a team would need to carry to cover all track conditions for all of the tracks we go to was just crazy. John had experienced that as a team owner but he wanted to go with the best decision for the majority of the “stakeholders” in our series – tracks, drivers and sponsors. So after extensive discussions with various people from each segment we decided we should limit the number of compounds we were going to use.”

The World of Outlaws Late Model Series has implemented a tire rule for the upcoming Speedweeks in Florida.