This week’s driver is Blake Kelly 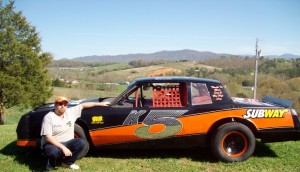 Blake Kelly is a veteran of both asphalt and dirt racing around the east Tennessee region. As a matter of fact, there have been times in which the 32-year-old has done both on the same night. Even though he says he has had more success on asphalt, Kelly’s primary focus will be on the dirt in a Street Stock car this season.

But the resident of Parrottsville, Tenn. likely won’t be tied to just one track as he does not plan to chase points. “I’ll mainly be running the Street Stock class this coming year. I’m hoping to run 411, Volunteer, and maybe Tazewell and Smoky Mountain. I’m just going to run wherever I feel like going.”

“I ran one race in 2001 at the Newport Speedway, and won it. Then I took a year off and started back in ’03, and that’s when I actually started on dirt. That year I would race at Volunteer on dirt and then I’d usually go to Newport and race on asphalt in the same night. That was back when you were able to do that kind of stuff.”

“I was mainly drawn to that class because of everybody I race with. I’ve mostly raced at Bulls Gap with a bunch of guys who all got along. Whenever one person would have a problem, everybody would pitch in and help. I’m sure it’s the same way in other classes but that’s just what drew me to it. And you don’t feel like a whole lot of people have an advantage over you because you’re limited in what you’re supposed to be able to do.”

“I guess it would be getting out there and showing off. Just going out and putting on a show.”

“I’d say my best moment was at Newport in 2004, the year I was running for a championship up there. Larry Hurst and I raced side-by-side for probably 18 of the 20 laps in the feature and I was able to just barely beat him at the line.”

“To be able to do it for a living. They say ‘if you love the job you do, you never have to work a day in your life’.”

“I would have to say Jamie Whitt. He’s just the best guy you could probably talk to in his faith and his determination. He’s just an all around great guy.”

“I guess relaxing with my wife and my friends, doing what we can around the house or having a night out on the town.”

“Probably dead. No, there ain’t nothing else I’d want to do.”