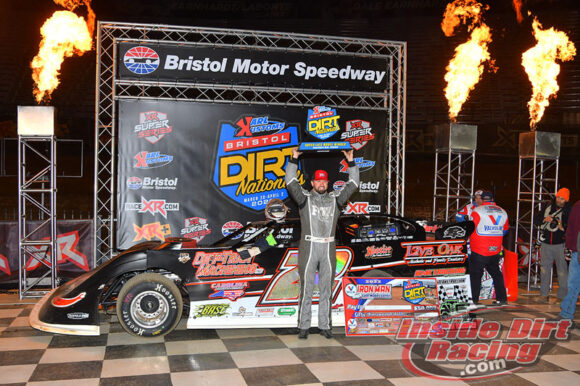 Many Dirt Late Model drivers and teams start their seasons off with Georgia-Florida SpeedWeeks held each year in January and February. Over the years, those races, mostly run under the sanctions of the Lucas Oil Late Model Dirt Series and the World of Outlaws CASE Construction Late Model Series, have grown into an almost two-month affair with some teams hitting numerous tracks and entering double-digit numbers of races.

Even though that time spent in the southeastern corner of the country serves as the traditional start to the racing season, many competitors come out of the region with driver, crew members, and equipment already exhausted with much more season left to go.

One driver who opted not to compete during Georgia-Florida SpeedWeeks was Mt Holly, North Carolina racer Chris Ferguson. Instead, he and his team focused their efforts on making sure their Team Zero Race Cars entry was completely ready to go when they would eventually leave their shop.

The results seem to have proven Ferguson right in his estimation that skipping the early events would ultimately work in his team’s favor. The past two weekends in the XR Super Series-sanctioned Karl Kustoms Bristol Dirt Nationals at the Bristol Motor Speedway demonstrated that the No. 22 machine was indeed ready for success.

In the four features that paid $50,000-to-win each, Ferguson recorded finishes of first(March 26), second(April 1), and third(April 2). The winnings from those three finishes alone tallied more than $80,000.

Following that trip to Tennessee, the CFR team headed for the familiar red clay of the Cherokee Speedway in Gaffney, SC. For 48 laps it looked very much like Ferguson would score a $10,000 victory in the Southern All-Star Dirt Racing Series-sanctioned ‘March Madness’ race but a flat tire with the white flag in sight dashed those hopes.

Still, his car clearly showed that it was fast enough to win in a race that featured the likes of eventual winner Chris Madden along with Jonathan Davenport, Mike Marlar, Ross Bailes and Kyle Strickler.

In the Media Center in Bristol following the Saturday night finale, Ferguson explained his decision to start his season later than many of those he raced against during the Dirt Nationals.

“It definitely helps a guy like me,” Ferguson replied when asked if the extra time during the off-season benefited his efforts at BMS. “Unfortunately, my team ain’t quite equipped to go run for weeks at a time like that. This whole off-season I got to do a lot of stuff that we haven’t done in a couple of years. We did a lot of R&D on every part in the race car. With our motor program, we were fresh coming into these March races. We were zero laps on the motors going into Smoky Mountain and zero laps on the cars. I definitely think there’s a little advantage there for us. I really think it helped set the tone for the way we’re running now, for sure.”

In a previous article posted to this site, Ferguson added more explanation to the efforts those in the Team Zero camp put in during this past off-season.

“This winter, Scott Bloomquist, Shane McDowell, Dale McDowell, Bruce Nunnally from Brucebilt, and myself kind of worked together on some changes we all thought we needed to make,” Ferguson explained. “Our cars, a lot of people are buying brand new cars every year or every couple of months, and we never felt like our cars were that far off. We might not have won as many races as everybody else but we felt like we still had a fast race car. At the big races, usually, there’s one of us up front and when there’s only four in the entire field and all four cars are in the show, it shows that we have good race cars.”