Chris Madden’s decision to race at Bristol vindicated with earnings 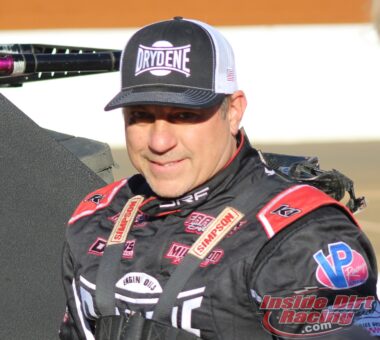 Chris Madden ended the 2021 season on a roll by winning $52,052 with his victory in the Peach State Classic at the Senoia(GA) Raceway then with his seventh career triumph in the historic Blue-Gray 100 at the Cherokee Speedway in Gaffney, SC. He then followed that late-season run up by scoring early wins this season in a World of Outlaws CASE Construction Late Model Series feature at Florida’s Volusia Speedway Park and another triumph at Cherokee in the Southern All-Star Dirt Racing Series-sanctioned March Madness event.

As a matter of fact, Madden had run so well during the early portion of the season that he was leading the WoO Late Models standings going into the weekend of March 25th and 26th. With that series coming to the Gaffney, SC resident’s home track for a pair of races paying $10,000 and $20,000 respectively, it seemed a safe bet that the hauler carrying the No. 44 Rocket Chassis would roll through the gates on each of those race days.

However, that would not be the case as the 46-year-old driver instead opted to forfeit his lead in that national touring series standings in favor of competing with the XR Super Series in the Karl Kustoms Bristol Dirt Nationals at the Bristol Motor Speedway. That event would feature a total of four Super Late Model contests paying $50,000-to-win over the course of two weekends along with a points fund in those events that would reward $100,000 to the champion.

Some questioned why Madden would not race on a track where he has had so much success and with a series in which he was leading the standings in favor of racing on a track that raised many question marks with some in events that were certain to draw top competition. In the end, those questions were answered after Madden won two of the four features and collected the $100,000 points bonus.

His total earnings from the two weekends were well in excess of $200,000.

“It means a lot,” Madden said in the BMS Media Center following his first win on the track most known for NASCAR racing. “There’s a lot of prestige here at this place so to have your name up on that board with all the guys who have won at this place, including the NASCAR guys, it’s a very fun place and very challenging at times. To be able to win here means a lot to me and my guys.”

Madden addressed the fact that he chose to come to Bristol rather stay in the more familiar surroundings near home with the series he has competed with in the past.

“You know, we made a big decision to come up here and run this race and run the XR deal,” Madden pointed out. “We were leading the World of Outlaws points when we came up here to race but it paid off for us tonight. I guess for all the people who were second guessing us, I guess this will help settle what they were thinking for what they were expecting us to do. When we have people who step up to the plate and put money into dirt racing like XR has and all the sponsors who are behind it, I think us as racers need to support it and hope it keeps growing.”

The veteran driver was confident in his decision because of the success he enjoyed at the end of 2021 and early this year.

“Our car has been good, I guess since the last part of last year,” he declared. “It’s very balanced and it fits me, that’s the main key, finding something that fits you. A lot of people think they can buy it and it’s there but you have to work on it and make it fit you. We’ve been able to find that and we’re just very happy right now with the spot that we’re in and we just have to keep doing our job and making the right adjustments and keeping things going our way through the night. Everything has to line up for it to happen. We qualified with the quick time, won our heat and started on the pole and were able to get it done tonight. We done our part tonight and it paid off for us.” 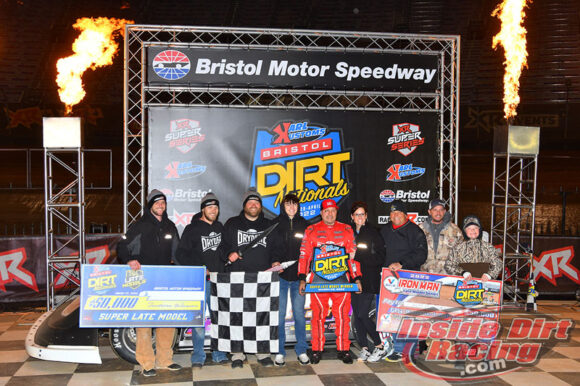 Chris Madden in BMS victory lane with his team

An issue in a heat race on the first Saturday night resulted in a fourth-place finish in that preliminary. After starting the main event from 14th, Madden managed a 12th place result on a track that allowed for little passing.

‘Smokey’ returned the next weekend with even more speed than he showed seven days earlier. The No. 44 established a new track record around the dirt covered half-mile in qualifying then won his heat race and eventually went on to earn another big payday after a flag-to-flag feature victory.

Another post-race trip to the Media Center was in order following his second Friday night triumph.

“Obviously, our main goal is to win races and we’ve won two on this trip,” Madden proclaimed. “We want to thank XR for putting the amount up that they have. These other guys should be paying this too. We should be racing for this(money) a lot more than what we do. We want to thank those guys for stepping out and putting on these races for us to come and race at.”

The only driver to win two features during the 2022 Bristol Dirt Nationals reiterated why he knew he was making the right move to come to east Tennessee.

“I mean, we’ve been good ever since back late last year. We found a few things that fit me with Mark Richards and the Rocket Chassis. We’ve been working extremely hard to fit me and we’ve found a spot to where I like it and we’ve run good everywhere we’ve been so I’m very pleased right now with the position we’re in and with the balance of our car. We’ve just got to make the right decisions at the right time and we’ve been able to do that. Everything has to flow together as a team and my guys are doing a great job holding their end up and I’ve done a great job driving it for them.”

This is a driver who has won numerous big races in his career. So where does he rank his Bristol victories?

“This is at the top of the list so it means a lot to get it done tonight.”