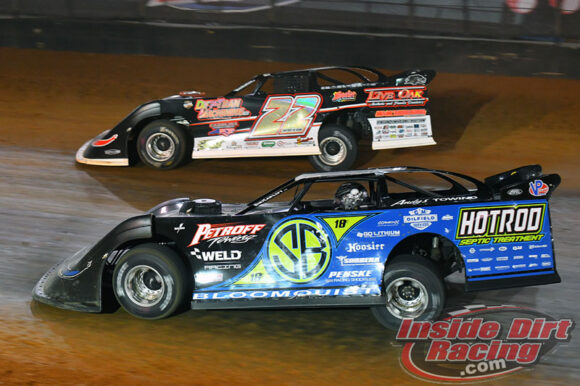 Whenever the topic of chassis brands in Dirt Late Model racing comes up, the first two names that are mentioned, and rightfully so, are Rocket Chassis and Longhorn Chassis. But early on in the 2022 season, two other brands have managed to grab some headlines away from the more noted types of cars. The most recent racing weekend in the Karl Kustoms Bristol Dirt Nationals at Bristol Motor Speedway illustrated that.

Team Zero Race Cars enjoyed some success in January and February during Georgia-Florida SpeedWeeks and that carried into the first of two weekends on the dirt covered half-mile in east Tennessee.

Dale McDowell collected two wins in the early part of the season in World of Outlaws CASE Construction Late Model Series features held at Volusia Speedway Park in Barberville, Florida. The 55-year-old veteran driver from Chickamauga, Georgia also scored a runner-up finish at Volusia in a makeup race that followed a rainout from back in January.

Following his second-place run in the inaugural XR Super Series event at Bristol on Friday night, the ‘Mac Daddy’ described his comeback from a cancer diagnosis and surgery last fall and how his brother’s Shane McDowell Racing team spent much of the time while he was away refining their Team Zero No. 17m machine so that it would be ready to win once back on track.

“My brother and Landon Hayes, his helper, they’ve worked really hard during the off months,” McDowell stated in the BMS Media Center. “I wouldn’t have dreamed that we would bounce back this quick. Maybe the off time helped. I was worried to death that I was going to get behind these guys because of all this young talent.”

Ricky Weiss was once a user of Team Zero Race Cars but last year opted to go in his own direction developing a machine known as the Sniper Chassis. While no wins resulted in the 2021 season, progress was made throughout the year. That progress led a a recent Ultimate Southeast Series feature win at Boyd’s Speedway in Ringgold, Georgia and a strong XR Super Series showing at Bristol on the first weekend of competition on the track best known for NASCAR racing.

However, the relatively new car is still a work in progress. After setting fast time in his qualifying group then winning a heat race, Weiss dropped from his front row starting spot to finish sixth in Friday’s 50-lap main event at Bristol. He then followed that performance up by again setting fast time in his qualifying group and winning a heat race on Saturday. His efforts in that feature resulted in a podium finish.

“We’ve definitely been fast early,” Weiss pointed out in the BMS Media Center on Saturday. “Yesterday we were scared to over-tweak and be too tight so we left it alone and were too free in the feature. We threw something at it tonight and definitely got better. We could probably tweak a little bit better and try to get a few spots better next week.”

The process of building an entirely new race car is something the Canadian knew would take time.

“The whole Sniper deal, we’re trying to work and trying to build something bigger and better that we can always improve with our team,” Weiss declared. “Scott(Bloomquist) taught me a lot and I’ll give him a lot of credit. We had a lot of long, late nights and created a great relationship. I’m proud of the guys back at the shop working their butts off. Everybody’s been working real hard and everybody’s gelling so it’s been good.”

Bloomquist was the originator of Bloomquist Race Cars which later went on to be known as Team Zero Race Cars. Saturday’s 1-2 finish in the $50,000-to-win race by Chris Ferguson and the legendary National Dirt Late Model Hall of Fame member bolstered the chassis brand.

Following that event, the 58-year-old from Mooresburg, Tennessee was asked if the top-2 finish by Team Zero drivers was a gratifying culmination of an off-season of work, particularly after his two-year period of recovery following a motorcycle crash in 2019.

“No doubt,” Bloomquist replied. “We’re back working a little bit. I’ve started on a new car and I’m working on a few changes that will make them a little more race friendly for new customers. We’ve got a few people already on standby as soon as I get the first car ready for myself we’ll start working with some of the other guys who are lined up. Again, this sport never stands still, you better be working. We’re really getting back to work, we’re back with Bruce Nunnally in Knoxville, he’s the one I started building cars with in the beginning and he’s going to be doing stuff, we’ve still got two jigs at my place. We’ll still play a little at the house and work on something that we develop for people.”

Weiss was also experiencing a feeling of satisfaction after Bristol.

“It’s definitely rewarding when you’re working on your own stuff, and like Scott says, trying to develop these cars,” the driver and chassis builder declared. “This sport is so demanding and there’s so much good competition out there now. It really don’t matter if you go to a five-grander or a fifty-grander, there are always good cars. You can go testing but it’s not the same as when you’re racing to really know if the car is getting better or getting worse. To go out there last week and to get that W knocked off early in the season then come out here and be able to be competitive every night was great.” 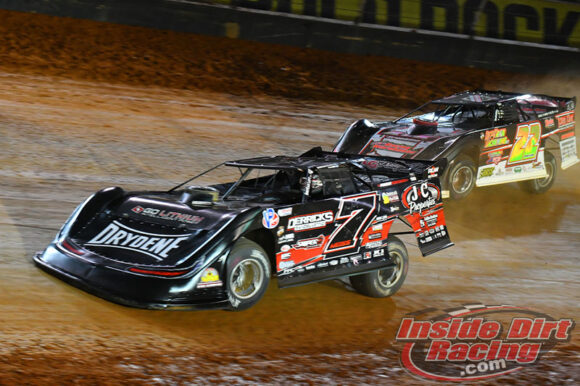 In his post-race appearance on Saturday, Ferguson also pointed out that the off-season was a critical aspect of Team Zero’s early season success.

“This winter, Scott Bloomquist, Shane McDowell, Dale McDowell, Bruce Nunnally from Brucebilt, and myself kind of worked together on some changes we all thought we needed to make,” Ferguson explained. “Our cars, a lot of people are buying brand new cars every year or every couple of months, and we never felt like our cars were that far off. We might not have won as many races as everybody else but we felt like we still had a fast race car. At the big races, usually, there’s one of us up front and when there’s only four in the entire field and all four cars are in the show, it shows that we have good race cars.”

Compared to other chassis brands, there are not many Team Zero cars in circulation. The Mt. Holly, NC driver believes the close association of those who do drive those cars has benefitted all involved.

“I think the chemistry with all of us working to get faster showed up,” Ferguson said. “My car is a 2018 car and it shows that you don’t have to have a 2022 model to go out here and win big races. I’m pretty sure Scott and Dale don’t have brand new race cars so it goes to show how good our stuff is because three or four seasons later it’s still kicking and they’re still the fastest cars out there.”

According to Ferguson, who also won last year in Bristol, not only do those involved with the development of the Team Zero car work well together but they also build a solid car, one that can stand the test of time.

“This is the exact same car that we won with on the first night here last year and the second night when we led laps,” Ferguson told the media. “We worked hard this winter with Scott, this same car won last year so we brought it back. Supposedly this isn’t even my fast car, the other car we run at Eldora is a bit faster. I don’t have the words to say right now. Last year, I wanted to win the big one and I didn’t but this year all four of them are big ones so we knocked one out already.”