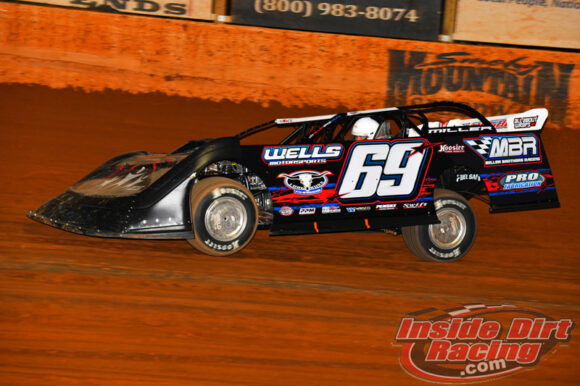 It was a busy night at Smoky Mountain Speedway on Friday with the American Crate All-Star Series playing a major role in that activity. This series is set to participate in both nights of the King of the Mountain double-header along with the Southern All Star Dirt Racing Series. At the end of night 1 it was young Carder Miller who stood on the top step of the podium after earning a hard fought victory. The Salem, VA driver was awarded $2,000 for his efforts.

Those six drivers participated in a Dash that would determine the first three rows on the starting grid for the feature. That race was won by Henderson followed by Miller, Ford, Wyatt, White and Long.

Jake Teague took the third heat by beating out Terry Poore and Jesse Lowe just before Carson Ferguson outran Aaron Guinn and Shannon Emery in the fourth and final heat.

Cameron Weaver and Trevor Sise won the two B-main races used to set the remainder of the starting lineup.

At the start of the 30-lap feature Henderson went to the front of the pack with Miller, Wyatt, Ford and Long trailing. But Miller quickly went to work as he passed by Henderson to assume the top spot on the leader board on lap 3. 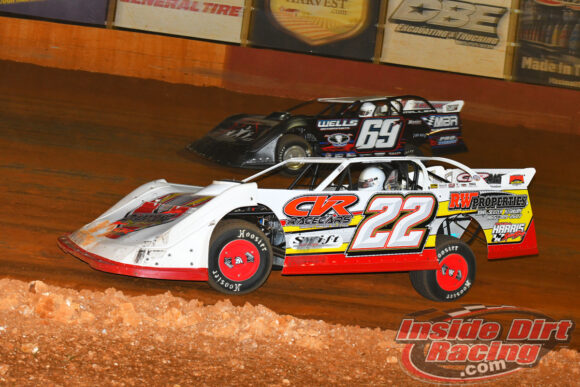 Matt Henderson(22) and Carder Miller racing for the lead

Both front runners remained in tight formation until they encountered slower traffic on lap 10. Henderson then began to look for an opening and he found one on lap 13 when he pulled into a side-by-side battle with Miller. The No. 22 car forged its way to the lead on lap 15, leaving Miller fall into the clutches of Ford.

Ford then took second just before a caution flag waved for the slowing car of Ferguson. On the ensuing restart, Hedgecock began to march forward as he bolted into fourth behind Henderson, Ford and Miller.

Contact between those two machines left debris on the racing surface which forced officials to display a yellow flag to the field. When green flag action resumed, Hedgecock began to fade as a result of damage to his rear spoiler.

But over the closing laps, it was Miller who would remain in control and drive on to take the checkered flag ahead of the pack.