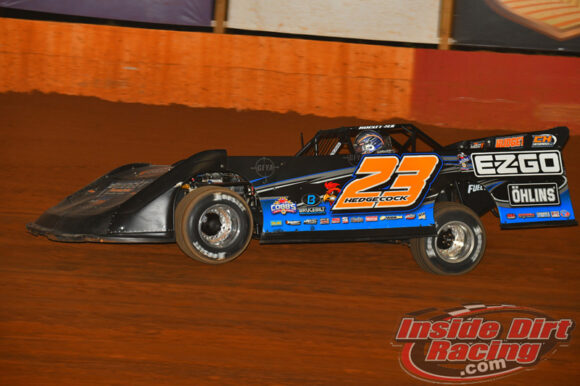 The Topless Outlaws Dirt Late Model Series took part in the Friday night portion of the King of the Mountain event at Smoky Mountain Speedway. In the end, a dominating performance by Cory Hedgecock earned the Loudon, Tenn. racer a $3,000 payday for his victory.

Cory Hedgecock earned the pole for the feature by being fastest in Group A qualifying as he turned a lap in 16.610 seconds around the 4/10 mile clay oval to top Dakotah Knuckles, Jed Emert, Ronnie Johnson, Layne Clifton and John Ownbey.

Chase King was quickest in Group B time-trials with a lap of 16.833 seconds to outperform Austin Neely, Kyle Courtney, Cody Courtney, Bobby Giffin and Skip Arp.

There were no heat races held for this division.

At the start of the 30-lap feature Hedgecock quickly assumed command of the race with King, Knuckles, Neely and Emert trailing. However, a yellow flag waved on the second lap to slow the action when Arp made contact with the outside retaining wall.

On the restart, Neely climbed to third while Johnson assumed the sixth positions a bit further back. In the meantime, Hedgecock set sail and built a lead of almost a full straightaway in short order.

The tightest battle in the early stages of the race was between Johnson, Ownbey and Courtney as they fought over positions 5-7. Ownbey would not only emerge from that battle with the fifth position but also move up to challenge Knuckles for fourth. 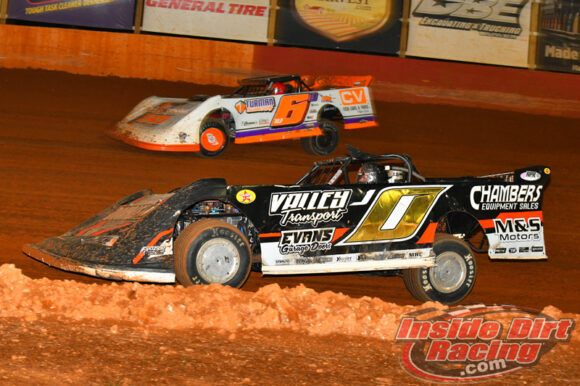 Courtney would pass by Johnson for sixth on lap 18. He would also move up to wrest fifth from Knuckles. By lap 24, the No. 171 machine had also taken fourth from Ownbey. As the laps wound down, both Courtney and Ownbey would pass by Neely to claim the third and fourth spots in the running order.

All the while, however, Hedgecock and King drove away with the No. 23 car eventually sailing under the checkered flag for the victory.

*Courtney was later disqualified for failing to go through post-race tech inspection following the event.