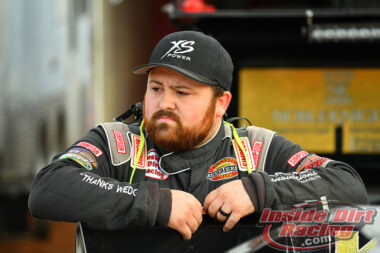 Jed Emert has been involved in east Tennessee racing for much of his life. This past Saturday night the Maryville, Tennessee driver’s dedication to the sport he loves paid off when he drove to victory in an unsanctioned Limited Late Model race at Wartburg Speedway. For the competitor who had won top go-kart events was well as other features in full bodied cars, it was the highlight of his racing career.

The sixth annual Dylan Kennedy Memorial held on the high-banked quarter-mile venue located in Wartburg, Tennessee doled out a hefty $11,137 to its winner. It was the biggest payday the 28-year-old Emert had ever taken from a race track.

“We’ve obviously run in some bigger races and we won some prestigious races in go-karts and we won a $3,000-to-win race two years ago at Wartburg,” Emert recalled in an interview with InsideDirtRacing.com. “Last year, we ran second in the Dylan Kennedy race and that paid $5,000 and we were tickled to death to run second in it but this is by far and away the most money I’ve ever won, for sure.”

The way for Emert to experience success in the Kennedy Memorial, which had been postponed from its original date due to rain, was paved earlier this year as he and his Alan VanWhy-owned team began laying the groundwork for this race. And that plan came together despite a mid-summer setback.

“Earlier in the year on July 3rd the Topless Outlaws had a race there,” he remembered. “We started on the pole of it and led the first six laps then, unfortunately, we got our stuff torn up for us out of the lead. It felt like we had a good car that night, I just probably wasn’t aggressive enough up in the seat which got us kind of runover out of the lead. Ever since that night, it felt like one got taken from us and we were looking forward to coming back.”

VanWhy, who owns and operates Noble Knights Construction, had promised Emert he would provide him a Limited Late Model when his business began to do well. He fulfilled that promise a couple of years ago. Thus, S&M Racing(named for Samantha VanWhy and Miranda Emert, wives of the two men) was born.

Not only Emert’s past experience but his enjoyment of the track helped lead to his victory.

“I love going to Wartburg because it’s so much fun to get around and Raymond Shepard and his wife and their people do a good job,” Emert explained. “The race track is as racy as it can be. We tried to do our stuff and have our ducks in a row, not that we went above and beyond what we normally do, but we tried to make sure we weren’t going to cost ourselves this race. We felt like we had a top-three or four car and if we didn’t finish there we were going to be disappointed.”

This was not one of those features in which the car that started on the pole went on to lead every lap and claim the checkered flag. Emert had to pass cars and have a few breaks fall his way to end his night in victory lane. After winning his heat race, Emert lined up 8th on the starting grid behind those cars that had been locked into the feature via their qualifying efforts. He quickly jumped into the top-5 when the green flag waved, then taking his time so that he could preserve his tires. 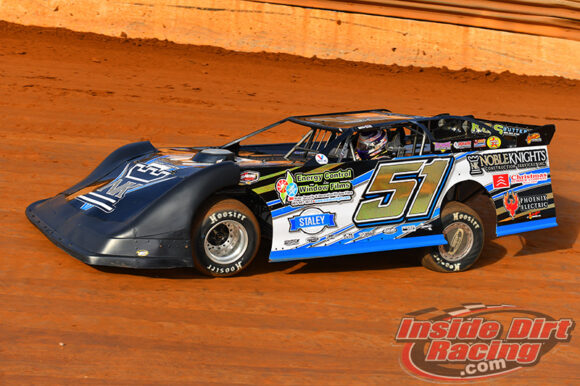 Ronnie Johnson fell from the runner-up spot with a flat tire. With Emert now running second, race leader Barrett Lowe suffered a mechanical issue that dashed his hopes. The No. 51 machine then inherited the top spot and led the final 8 laps to score the win.

“I had a soft tire on the right rear so I was trying to just ride and be patient until about ten-to-go,” Emert pointed out. “Oddly enough, we had a caution with about ten-to-go. We inherited the lead with eight-to-go and led the rest of the way. We kind of got a little bit of a gift, but as I’ve been telling everybody, we were in position to receive the gift. We had a good car and I think we were as good as Barrett was but it would have been hard to get him though without some problems.”

So what will such a big win do for S&M Racing?

“It’s going to take a lot of pressure off of us,” the driver declared. “We’re very fortunate to have Alan, and his business is doing well, but if you’re tearing a bunch of stuff up and paying for a lot of things throughout the year it can get kind of touch-and-go toward the end of the year. It will pay for tires and fuel and stuff like that. This will take us, as long as nothing crazy happens, into next year as far as helping us out. It takes a lot of pressure off of our shoulders.”

Emert also drives a Crate Late Model for veteran car owner Steve Ritchey. That duo has made multiple visits to victory lanes all across east Tennessee. 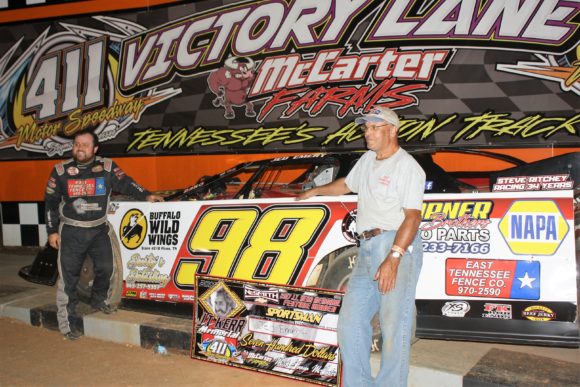 When asked if he is happy with his progression through the ranks of Dirt Late Model racing, Emert thoughtfully offered a response.

“Years ago, when I was a kid I prayed and I dreamed that I would get to race something one day. When I got to race a go-kart I wished I would get to race a Late Model just one time. Then I thought I just wanted to win a race. After we won a race with Steve, I thought I would love to have the opportunity to drive a steelhead. I have to remind myself that the things I’m getting to do today are things I dreamed about ten years ago. Hopefully we’ll keep digging and keep getting better. I never imagined I would ever win a $10,000 race so I am genuinely thankful to be where I’m at. If both of my car owners called me tomorrow and said they were done, I’d be proud of what we did.”