This week’s driver is Robbie Comer 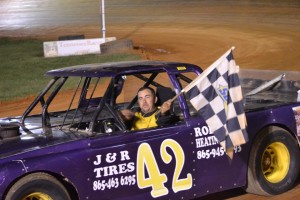 Robbie Comer in his days racing trucks at 411 Motor Speedway.

Robbie Comer has made winning seem commonplace. The 36 year old resident of Lafollette, Tenn. has piled up a total of six track championships at the 411 Motor Speedway in a variety of classes. In 2013, he captured the season long title in the Thunder & Lightning division on the 3/8 mile dirt oval.

And in the coming year, Comer has some big news. He will be looking to compete in a new class on the Seymour, Tenn. track. “I’ve started working on a new car,” he announced in a recent interview. “I’m going to try to race some in that Sportsman class. I’ve got me a Warrior chassis and I’m shooting for running it in the Sweat Heart(February) race, but I don’t know for sure if it will be ready by then.” 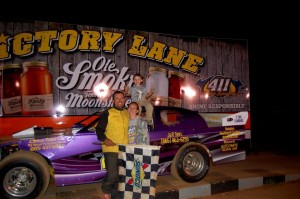 “My mom used to take me to watch my uncle(Johnny Rector) race at Crossville around 1983 or 84. I owned a car but didn’t drive it in the early ’90s, then I got in the driver’s seat myself around 1995. I quit in 2000 and started back again in 2004 and I’ve been pretty consistent almost every Saturday night since.”

2. Why the Thunder and Lightning class?

“I really got into it more by accident than I did on purpose. I was running modified street and they kind of shut that class down, but I was able to change the modified street legally over to a truck. Then they started running modified streets and trucks together. But going into the next season, which would have been the 2012 season, the rules they came up with wouldn’t allow me to run the truck any longer.”

“I just enjoy the competition. And racing is a way to get the Lord’s name out there and show how He’s blessed me through my racing.”

“I’ve actually got a couple. As far as winning, I won a race on the Saturday night after my son(Jayden) was born on that Friday. And I won a race on mine and my wife’s(Jamie) fifth anniversary.

“Driving a Cup car would be great. But really, I’d just like to be able to make a living from racing.”

“It would have to be Jimmy Owens, I guess. And somebody here who’s more local would be Josh Collins. I got to know Josh’s step dad years ago and that’s how I got to know him so well.”

“Ride horses. Me and my wife have six quarter horses.”

“Probably up in the mountains somewhere riding horses.”