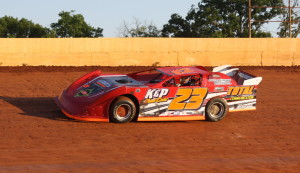 Cory Hedgecock experienced what had to be considered a breakout year as a dirt late model driver in 2013. Racing primarily at the 411 Motor Speedway with ventures to other tracks such as Smoky Mountain Speedway and the Volunteer Speedway, the 21 year old former drag racer piled up a total of twelve wins in Limited Late Model and Crate Late Model competition.

Racing is in Hedgecock’s blood. His father Chad earned an impressive list of accomplishments in drag racing and his grandfather Mike Hedgecock runs the highly successful Eagle Racing Engines business which builds both oval track and drag racing power plants.

When Cory isn’t racing, he works for his grandfather on a variety of tasks. His talents are put to use on engines for both types of racing. Eagle produces crate, limited and super late model motors for dirt racing to go along with the engines they build for drag racing competition.

Hedgecock’s success over the past season not only made a name for him as a driver, but it also benefitted the family business as well.

“I think it helped a bunch because we don’t have a ton of people in limiteds,” Hedgecock said of his success in terms of helping the engine operation. “We’ve got more people in crates than anything, but this year I think it’s helped a bunch on limited sales.” 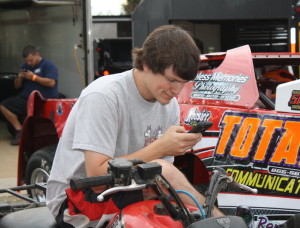 Hedgecock maintains a somewhat humble attitude about his early success. “We won twelve times, probably got lucky in ten of them,” he said with a laugh.

But the reality is that there was little luck involved in many of those twelve triumphs. Several times, especially as the season progressed, Hedgecock’s margins of victory increased. That proved to be the case in the season ending National Steel Head Championship at 411. In that race, the driver of the No. 23 car built leads of over a straightaway during green flag runs.

“We might have gotten lucky a few times,” he added regarding his success in 2013. “But you’ve got to be in position to get lucky. We were fast most times we went out on the race track in crates and limiteds for sure. We struggled a little bit in supers, but it will just take laps. And every lap I make, I feel like I’m getting better and better. You can never have too many laps under your belt.”

Hedgecock’s progression as a driver is particularly impressive considering that he started out racing in a straight line.

But the move to dirt racing was borne out of both necessity and the desire for a change of scenery.

“We started trying to build some motors for round track again and we went to the race track with Brad Hall one weekend and I said ‘this looks fun’. I was getting a little run down on drag racing and getting a little aggravated with it because I wasn’t having as good of a year as the year before,” Hedgecock explained. “I was getting down on myself and was mentally beating myself up so dad bought us a dirt car. We had Hall to race it a few times and he won once and came in second twice so we knew we had a good race car.

“When I started doing it, I was sold,” he added of his earliest dirt racing ventures. “It was done from then on. I think October of ’11 was the first time I ever sat in a dirt car.”

Hedgecock doesn’t expect to have the same kind of success that he had in 2013 every year. But he does hope to be competitive each time he hits the track.

“I’d kill just to win five races next year,” he declared. “It would be tough to repeat what we did this past year. All I want to be known for is that when we show up at a race track, the other drivers will have to think ‘Hey, Cory’s here so I’ll probably have to race him if I’m going to win tonight’.

“I just want to be a consistent top-5 car and it won’t hurt my feelings if I don’t win. I just don’t want to go out there and look horrible. I know those nights will come, but week in and week out, I want to be a very competitive car so people will think they’ve got to race me when I show up.”

Hedgecock and his team plan to continue that progression in 2014.

“We’re going to try to run some super shows but it takes money to keep this thing going ’round and ’round, and we’ve done good in crates and limiteds,” he said of his upcoming plans. “We need to win some money no matter what we’re doing. I don’t necessarily think we can win races right now in supers. I know you’ve got to go to get better, but I hate going to the race track thinking I can’t win.

“I think we’re going to try to run for rookie of the year in the NeSmith touring deal this coming year, as of right now. That could change, but the plan is to concentrate on that series. Other than that, we’ll go run limiteds in the big shows at 411, the Bulls Gap deals with Vic Hill, and some at Smoky Mountain. We want to do good this year, then in the following year we’ll probably concentrate more on supers.”