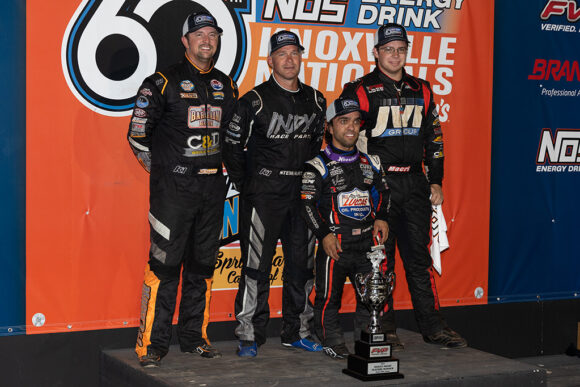 KNOXVILLE, IA – August 13, 2021 – The Hard Knox portion of the NOS Energy Drink Knoxville Nationals pres. by Casey’s continues to be one of the most magical nights in sprint car racing, and that was proven once again on Friday night.

With 69 entries fighting for four coveted lock-in positions, the intensity was through the roof. A loaded program of split Qualifying, six Heat Races, two B-Mains, and a 25-lap A-Main greeted fans ahead of Saturday’s sold-out finale.

Nostalgia was floating through the air when “GO JAC GO!” chants broke out as the legendary Jac Haudenschild put the Pennzoil #22 on the pole position of the A-Main in his final preliminary at Iowa’s Knoxville Raceway.

The Wild Child led five laps, but ultimately this night belonged to Rico Abreu. The St. Helena, CA racer was dominant in every phase of the game as he ran away to a comfortable 4.645-second victory and locked-in for his sixth consecutive Knoxville Nationals A-Main.

“Everything happens for a reason.” Abreu, who was one point away from locking in last night, acknowledged. “There’s a reason I qualified 30th last night and there’s a reason I missed the lock-in. I’ll take this. I wasn’t worried one bit about it.”

Earning the outside pole of the A-Main after going QuickTime in Flight B and transferring through his Heat Race, the #24 was a lethal weapon all night long on the black zook clay.

He settled into second on the start as Jac Haudenschild led the opening five laps, but then made his move on Lap 6 and never looked back. He climbed up top to celebrate his third Knoxville Raceway victory and echoes of “RICO! RICO! RICO!” were shouted throughout Marion County.

“I just want to win races, man,” Abreu added. “I don’t do these championships or points, I just want to win. I knew last night being top five with those guys that we would be fine tonight. Also, I really think I’ve just matured in life as I’ve gotten older. I know how to react to these results and everything that happens in our sport. I think that has made me a sharper racer, too.”

Outside of Rico, the story of the night was 63-year-old Jac Haudenschild. In his 39th and final Knoxville Nationals attempt, he earned the pole position of Hard Knox and started pole with a chance to transfer to Saturday’s A-Main. He held a lock-in position for 22 of 25 laps before ultimately fading to run sixth aboard the iconic Pennzoil #22.

“I just made too many mistakes, and with these guys, you can’t make any,” Haudenschild offered. “We definitely learned a lot, though, and I feel better as well heading into tomorrow.”

For Macri, who was at a loss for words, he earned his first-career A-Main appearance at The Granddaddy of ‘Em All. The 22-year-old Dillsburg, PA native was in shock even at the post-race press conference.

“I really don’t even know what to think,” Macri said. “For a kid like me to put it in the Knoxville Nationals, that’s just unreal. I still can’t believe it. I’m struggling for words.”

Following Macri to the line and finishing third was Bixby, OK’s Shane Stewart in only his fourth Sprint Car race of 2021. The now track owner of Port City Raceway has qualified for his 20th career Knoxville Nationals, this time with the Team Trackhouse #71 prepared by Bernie Stuebgen of Indy Race Parts.

“I knew this would be tough,” Stewart admitted. “Bernie is part-time. and this is my fourth race of the entire year. Guys like Kyle Larson come out and make it look like the easiest thing in the world, but let me tell you it’s not. I don’t know how many races I have left in me, so moments like this are special.”

Earning the fourth and final lock-in to Saturday’s Knoxville Nationals finale was Brock Zearfoss aboard the #3Z.

“This is everything for a team, just making the Nationals,” Zearfoss noted. “Moral wise, confidence wise, this can change seasons. Our team has been through a bit of a rough patch, the whole year actually. This is really rewarding finding speed here.”

Closing out the top-ten on Friday night was Scott Bogucki in fifth, Jac Haudenschild in sixth, Shane Golobic in seventh, Bill Balog in eighth, Kyle Reinhardt in ninth, and Lynton Jeffrey in tenth.