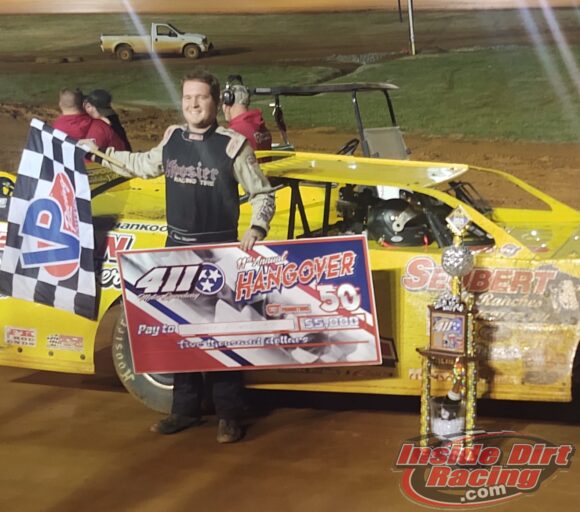 Pierce McCarter steered the MasterSbilt Race Cars house car to victory lane in Saturday night’s Hangover event at 411 Motor Speedway. The 28-year-old Gatlinburg, TN native earned every bit of the $5,000 he collected after a hard fought 50-lap feature on a race track that had been made soft and rough by a week’s worth of snow and rain.

In the process of winning the race, McCarter had to outlast some of the top regional racers in the area. Cory Hedgecock led early on then pulled off track. Dustin Linville was also an early front runner who was unable to make it to the finish line. And in the end, the No. 71 machine had to hold off a hard charging Christian Hanger before driving under the checkered flag.

“It was demanding, for sure,” McCarter admitted in an interview with InsideDirtRacing.com. “When I was riding around there in second and third and I was behind Dustin and Cory, they had pretty good cars, I was just trying to hold my own. I was able to get by Cory there for a little bit, but I’m telling you, if I wouldn’t have gotten into first, I don’t know if I would have stayed out there to be honest with you. I’m telling you, it was tough. I’m going to have to get on a workout program.”

Please also consider reading “How much longer can Kevin Harvick keep up this pace?“

The Indiana-based MasterSbilt house car has deep roots in the sport of Dirt Late Model racing with the likes of Don O’Neal scoring numerous wins in its driver’s seat. And McCarter was proud to carry on that tradition by achieving his first Super Late Model victory in the bright yellow racer.

“I can’t thank Jim Beeman and Tader Masters enough for giving me the opportunity that they did,” McCarter declared. “You’re not going to find two people who care much more about this sport than they do, there’s no doubt about that. They’ve worked so hard on this car. Just to give me the opportunity was awesome. To go out there and get a win for them, especially. And that was my first Super Late Model race that I’ve ever won so it was just a great night.”

A test session in the ride held prior to the Christmas holiday allowed the team to improve the car before hitting the track in the Hangover even though conditions were far from the same.

“We tested a little bit and it got pretty slick when we tested,” the driver pointed out. “We had good weather and stuff. but right before Christmas all that snow came and saturated the grounds here then we had all the rain and everything. As far as the test session, we definitely gained on it. Tader took the car back up north and him and Jim cut on it and did some things so it and got it to where it would rotate pretty good in the corners. It showed how good the car was tonight. Whenever I could hold on to it and hit my marks it was really fast.” 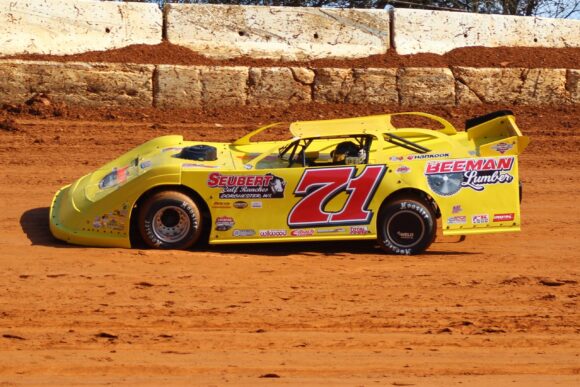 McCarter said the conditions on Saturday evening caused him to adapt his driving style to suit the needs of the track and the car. He also hinted that more starts might be forthcoming.

“That thing had so much side-bite and traction that I kind of had to back my corner up and really rotate that thing just the right amount because it would scotch up and just take off,” he said. “My hat’s off to them, I couldn’t have done it without them and I appreciate the opportunity. Hopefully there’s more to come.”

So when and where might he drive the car again?

“I can’t answer that,” McCarter stated. “Honestly, I’m just thankful to be able to drive it. Our plans were that we were going to race here then go to the Ice Bowl. We plan on going down there and racing. then after that, who knows. I want it to last as long as it can. We’ll just have to put our heads together and think about it and kind of see and talk to Tader and Jim to see where we’re at. We’re just going to have to play it by ear, I guess.”

Pierce’s younger brother, Mack, has been enjoying success of his own during the winter months. He scored three consecutive Crate Late Model triumphs combined at 411 Motor Speedway and the Volunteer Speedway in Bulls Gap, TN. Pierce insists that a renewed focus has led to the recent wins.

“Absolutely, Mack won three in a row,” the older brother explained. “We’ve really been kind of buckling down and taking it seriously. I took some time off trying to really concentrate on myself and the racing side of it. We’re working hard right now and it’s paying off.”