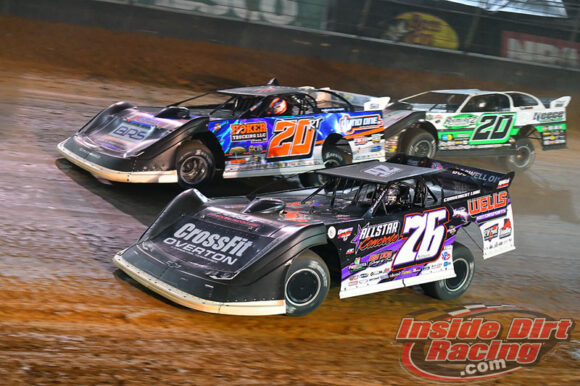 Drivers such as Brandon Overton(76), Ricky Thornton Jr.(20RT) and Jimmy Owens(20) have raced this week in these midweek events

It has been well documented over the past several months that there are significant shortages of certain products crucial for the running of Dirt Late Model racing events. In particular, tires seem to be in short supply throughout the racing industry. Some who are in a position to know have even suggested that races may ultimately have to be cancelled due to this lack of inventory.

As a result, a number of competitors have pointed to those shortages as one of the reasons for not publishing complete schedules on their websites to let their future plans to be known. Some do not want to run the risk of travelling to an event only to find that there are not enough tires or other components on hand.

On Wednesday and Thursday nights of this week, four major races have taken place in different parts of the country. And in those shows, car counts that very nearly resembled those of crown jewel events have been found in the pit areas.

The Castrol FloRacing Night in America-sanctioned Illinois SpeedWeek held a race on Wednesday evening at Spoon River Speedway which drew 56 Late Models to that Banner, Illinois facility. The following night, the same tour travelled to Lincoln Speedway for a second consecutive night of racing. A total of 55 cars rolled through the pit gate at that Illinois track. Both features paid $22,022-to-win.

At the same time, the XR Super Series contested two of its planned four-day happening at The Dirt Track at Charlotte on those same two nights. So far, those races have drawn 47 and 50 cars respectively to their $25,000-to-win features. The Colossal 100 four-day affair will continue on Friday and Saturday with the finale doling out $50,000 to its victor.

So with shortages being a major concern throughout the industry, why have these car counts been so good?

Apart from the purse money available, perhaps one reason for the stellar numbers is the fact that there are no Lucas Oil Late Model Dirt Series or World of Outlaws CASE Construction Late Model Series races on the schedule for this weekend. With no other obligations, drivers who are regulars on those tours are free to compete wherever they like if they choose to do so at all.

The lure of good competition and great facilities on which to race likely also played into the decision of many who have been in action so far this week. And for those who plan to run the full tour with either FloRacing or XR, the promise of good bonus and points funds available were most likely a deciding factor.

With a number of rainouts from earlier in the spring, some may have simply wanted to race and these particular shows were good choices because of location, payouts, and any other factors that might be mentioned.

But the most likely reason for the outstanding car counts of this week is that teams are willing to put concerns over shortages aside to race in a well run show for good money. A lack of tires or any other essential equipment can be dealt with later in exchange for racing right now with solid paydays on the line.

And let’s be realistic, the bigger races are more likely to have the supply of tires needed than smaller events so for teams running a pick-and-choose schedule there may not have to have concerns over tires anyway. If any race is going to be cancelled due to a tire shortage it isn’t going to be a crown jewel or some other feature paying more than a $20,000-to-win purse.

While there will always be benefits to following a series, more and more competitors in the sport of Dirt Late Model racing seem to be coming to the conclusion, by want or necessity, that they do not necessarily have to stick with a tour to give themselves the best shot at profitability. Shortages may be an issue, but the money available is a bigger issue until the supplies are completely exhausted.

But for right now, fans are getting to enjoy great fields of cars in midweek races with drivers giving their all for solid payouts.