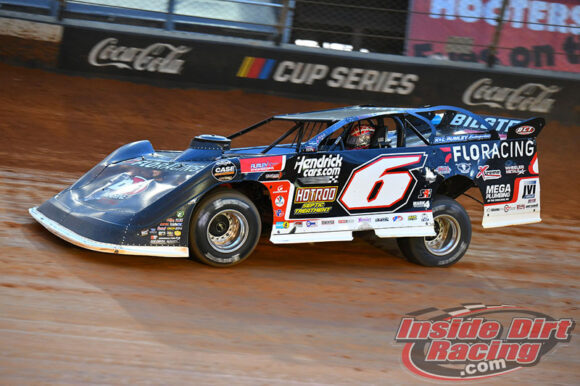 Defending NASCAR Cup Series champion Kyle Larson made another successful venture in the Dirt Late Model world on Thursday night at The Dirt Track at Charlotte for the second of four nights in the Colossal 100 weekend. ‘Yung Money’ held off a late charge from Brandon Overton to claim his first XR Super Series victory of 2022 adding to the FloRacing Night in America win he scored earlier this season at Eldora Speedway for K&L Rumley Enterprises.

Larson’s night proved to be a perfect one as he set quick time in his qualifying group, won his heat race then led every lap in the feature.

The Longhorn Chassis driver from Elk Grove, California earned a $25,000 paycheck for his efforts on the 4/10 mile track located in Concord, NC in a race shown live by raceXR.plus.

A total of 50 cars were signed in for competition.

Feature Re-cap: When the green flag waved over the 30-lap feature Larson jumped immediately from his inside front row starting position to take the lead ahead of Overton, Madden, Bloomquist and McCreadie. The top-5 quackly sorted themselves out into single-file formation and began logging laps.

Track crews had very little time to work the surface after an earlier rain shower had brought the facility’s curfew very much into play. As a result, the racing program was contested at a fast pace as was the feature itself which ran caution free over its full distance.

Larson began to encounter slower traffic just before the halfway mark and was initially able to keep Overton safely behind as he picked through lapped cars. However, Overton did begin to close and with just five circuits remaining was right on the rear spoiler of the No. 6 machine.

Ultimately, though, Larson was able to maintain his lead and sail under the checkered flag to claim the victory.

“It feels good,” Larson said in victory lane. “Some great money to race for in Late Models this week. I’m glad that we could race here close to home. I felt pretty decent last night, these Late Model races the formats are straight up so you’ve got to be good every time you hit the track and I just didn’t qualify that good last night. I was able to qualify quickest in my group tonight. I think the rain helped me out, I think being a Sprint Car guy I’m better with moisture in the track. The track was to my liking to night and my car was really good.”