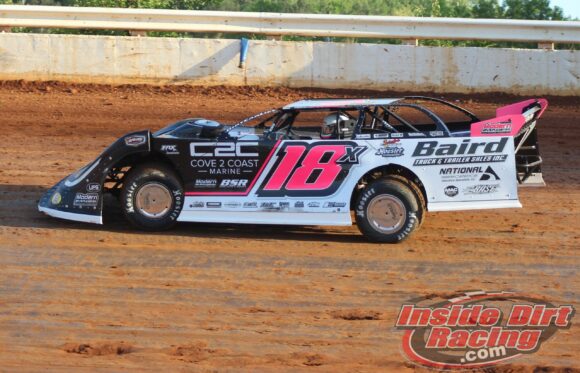 Saturday brought the feature race for the Super Late Model class in the 31st annual Ice Bowl at Talladega Short Track. When the racing action was completed on a sunny but cool afternoon at the Eastaboga, Alabama track, it was Michael Page who claimed the victory. The Stinger Chassis driver from Douglasville, Georgia collected $6,000 for his efforts in the historic race.

A $1,500 bounty had been placed on Page should anyone be able to beat him but he was ultimately able to fight off the bounty hunters after a somewhat shaky beginning to the race.

Qualifying and heat race action was held on Friday while B-mains were contested. Results from that action can be found by clicking here.

Preliminary action set the starting lineup for the feature as so:

After one failed attempt to start the feature, the second attempt proved disastrous for some. As the cars roared into turn one the cars of McCarter and Page came together with Page’s machine very nearly going airborne. Several other cars piled in with varying degrees of damage being incurred. McCarter’s front row starting ride was retired from the event.

Page had been moved to the front row with McCarter’s retirement. On the third attempt to start the 50-lap main event there was slight contact between the cars of Horton and Page which sent Page for a spin in turn one with multiple cars again piling in.

When the feature finally got underway, it was Page who bolted to the lead from the outside of the front row with Horton, Hanger, Jones and Oliver trailing. The top-5 quickly fell into single-file formation and began clicking off laps until a caution flag was displayed on lap 6 for the spinning car of Picklesimer.

Another yellow flag waved on the eighth circuit for a spin by Duncan. On the ensuing restart, Hanger jumped up to to second after contact between himself and Horton but another caution flag was shown to the field for a multi-car wreck in turn four.

A significant moment occurred during the second lap 8 caution when Horton had to give up his top-5 position to come to the pit area for a tire change. That dropped the No. 16 car to the tail of the field.

Third-running Jones spun after being tagged by another car on the lap 8 restart. Numerous cars spun to avoid contact with little damage done to any of those machines. At that time, Page led Hanger, Oliver, Roszell and Cooper. The top-2 of Page and Hanger quickly broke away from the pack by lap 15 with Page beginning to look dominant.

Page encountered slower traffic by lap 22 which allowed to Hanger to close in. The leaders found it difficult to get around slower cars until they were provided a reprieve when a yellow flag wave on lap 29 for the stalled car of Ownbey. Page continued to lead Hanger, Oliver, Roszell and Cooper at the time of caution.

With less than 15 laps remaining, Hanger closed to the rear spoiler of Page as those cars fought for the race lead. Slower traffic would play a role in the outcomes as the lead machines worked to pass.

With 5 laps to go, Hanger moved to the outside of Page in an attempt to grab the lead but Page fought back the challenge. Further back, Tidmore rose to the fourth position. However, a caution came out on lap 46 to restack the field.

Over the closing laps, it was Page who would not be denied a sixth consecutive Ice Bowl win in the Super Late Model division.