These updates are brought to you by Smoky Mountain Speedway in Maryville, Tenn. The next race scheduled for SMS will be dual $5,000-to-win ‘Rockin With the Stars’ features for the Southern All-Stars Dirt Late Model Series and the Steel Block Bandits Late Model Series on April 23rd. Also, be sure to make plans now to attend the $50,000-to-win Lucas Oil Late Model Dirt Series event on the weekend of June 17-18, 2022.

Weather Forecast: Sunny with daytime highs in the 70’s and nighttime lows in the 50’s.

Time: The drivers meeting is slated for 12:30

Brandon Overton has entered two races this weekend(Spring Nats at Swainsboro & Iron-Man/Ultimate at Smoky Mountain) and won both.

1:00- Hot laps for all classes underway.

Qualifying Results: There will be two qualifying groups.

Heat Race Results: There will be four heat races. Everyone will transfer to the feature.

*Crash on the first attempt as Collins, Kirkpatrick and Duke were involved in an incident.

3:40- They are going to take a few minutes for track prep. The green flag is scheduled for 4:00pm.

Lap 12 caution. Order same as above through the top-5 with Miller, Strickler, Carson Ferguson, Wilson and Bailes rounding out the top-10.

Lap 29 caution for slowing Gordon. Top-4 of Ferguson, Madden, Overton and Marlar we’re tight in traffic with everyone on the bottom. Davenport and Strickler had been fighting for 5th before the caution.

Flat tires seem to always become an issue in the second half of races here.

Watkins spins on the restart

Overton made a move on the restart and got to second but it was negated when Gordon stopped on track to bring out a caution. Still 8 to go.

Overton made an outside move on the restart but Madden closed the door. Just as white was about to come out Strickler spun.

Both Overtons have flat tires with one to go to bring out caution. Madden leads Marlar, Davenport, Wilson, Carson Ferguson, Watkins. 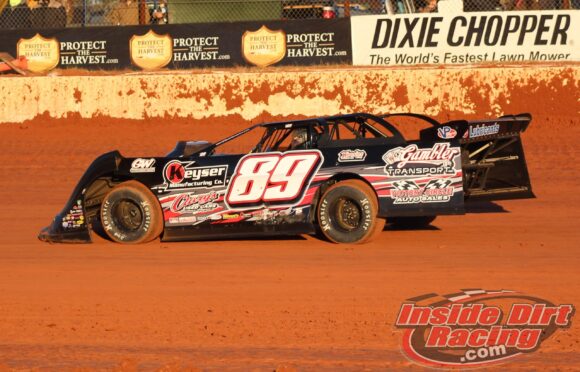 Ashton Winger is expected to be among those in competition