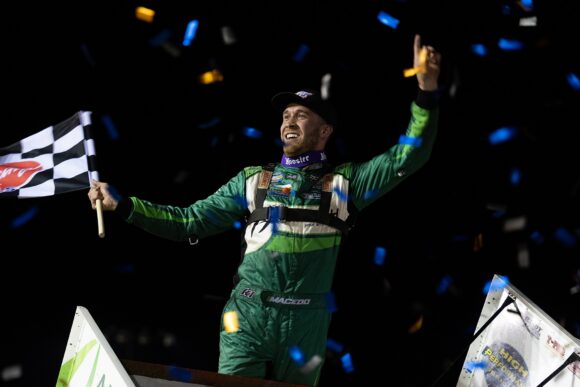 PAIGE, TX – March 5, 2022 – Carson Macedo and Cotton Bowl Speedway started off on the wrong foot, there’s no denying that, but that relationship is now in the mending process following an ecstatic victory in Saturday’s Texas Two-Step finale.

It goes back to his debut at the Paige, TX 1/3-mile last year, which began a streak of three races that included one destroyed car, two flips in a single night, and zero top-10 finishes. That wasn’t anything like his experience this time, though, as this one had more of a confetti-filled and picture-taking vibe to the night.

“I remember leaving here last year thinking it was the worst night of my career,” Macedo mentioned on how the redemption felt. “We cleaned out a lot of parts that weekend and I was crushed with the way I ran. To come back this year and pull off a win the way we just did, even after last night, shows the strength of this Jason Johnson Racing team.”

The 25-year-old native of Lemoore, CA started sixth in the 30-lapper and immediately powered forward to prove his Albaugh #41 was a winning contender. A heated battle for second and third consumed much of the middle stages, but the battle really began once Macedo secured second on Lap 21 and set his sights on leader Sam Hafertepe Jr. He caught him and slid by on Lap 27, taking the lead and running away with his 18th career World of Outlaws NOS Energy Drink Sprint Car Series win.

“I don’t think I’ve calmed down yet, my heart rate is still pretty high,” Macedo joked. “I knew I had a good car, but it felt like I was making the wrong decisions early on. We struggled last night pretty bad, but Phil [Dietz] did what he does best and came back to give me a car capable of winning. It was a lot more technical tonight, so the more patient I was, the faster I went.”

More than anything, Macedo’s rewarding Cotton Bowl score comes with perfect timing and loads of momentum. It served as a welcomed first victory of the season and came one week before The Greatest Show on Dirt heads to his home state of California, where plenty of local and favorite tracks are waiting.

“It’s always crucial to knock out that first win as early as you can,” Macedo added. “It’s crazy how much pressure something like this can lift off your shoulders. Such a great confidence booster especially with all of my home tracks coming up next.”

On the other end of the story is home state hero Sam Hafertepe Jr. of Sunnyvale, TX, who nearly pieced together a perfect night to conclude the Texas Two-Step. The driver of the #15H recorded Slick Woody’s QuickTime, won his NOS Energy Drink Heat Race, won the DIRTVision Fast Pass Dash and led 26 laps before finishing second in the Feature at Cotton Bowl.

He dropped some knowledge from a Sprint Car legend, noted his team is only getting better, and received a roar of applause from the Paige, TX crowd during his post-race interview.

“Rich Ferkel told me a long time ago that you don’t get very many opportunities to win races, so you have to seize every one you do get,” Haferted said. “I just didn’t do that in lap traffic tonight. We started this year really bad, though, so to be where we are at now is awesome. We’re not an Outlaw team, but we’re trying to be. We’re trying to do everything the right way. Hopefully, we can spend a lot more time on the frontstretch this year.”

Earning a slice of his own redemption was James McFadden, who suffered a flat tire while leading on Friday, and returned to finish third on Saturday. It’s the second podium through an impressive opening stint in his new Roth Motorsports #83 ride.”

“We were in the hunt, but just made a few too many mistakes tonight,” McFadden said. “I’m incredibly happy with this Roth #83, though, it’s been fast out of the box every single night. It’s a privilege to be on the World of Outlaws tour with such a competitive car. I hope we can get Dennis and Theresa a win or two in their home state these next few weeks.”

Logan Schuchart claimed KSE Hard Charger honors with a 12th to fourth charge in the Shark Racing #1S, while championship leader David Gravel turned in another top-five finish for the Big Game Motorsports #2.

Rounding out the top-10 on Saturday night was Brock Zearfoss with a season-best sixth, defending champion Brad Sweet in seventh, Donny Schatz in eighth with Tony Stewart/Curb-Agajanian Racing, Giovanni Scelzi in ninth, and Rico Abreu with a season-best 10th.

Of Macedo’s 18 victories, Cotton Bowl Speedway is the 13th different track he’s won at and Texas is the 12th different state he’s won in. His four laps are also tied for the least amount he’s ever led in any World of Outlaws win.

2013 World of Outlaws champion Daryn Pittman returned to competition on Saturday, substituting for former boss Kasey Kahne in the same #9 car he won his title with. The new Texas resident and owner of UltraShield Products finished 22nd after transferring from the Last Chance Showdown.

Sam Hafertepe Jr. became the fifth driver in five races to earn the Slick Woody’s QuickTime Award, bringing the driver of the #15H to a total of 15 QuickTimes in his World of Outlaws career. He circled Cotton Bowl in 13.612 seconds.

Ayrton Gennetten (Versailles, MO) completed a weekend sweep of the MicroLite Last Chance Showdown, winning both Friday and Saturday races in his #3.

Tanner Thorson (15th) and Daryn Pittman (22nd) both qualified for their first World of Outlaws Feature of the 2022 season.