These updates are brought to you by Smoky Mountain Speedway in Maryville, Tenn. The 2021 season has concluded at SMS. Check in for the full 2022 schedule at a later date but make plans now to attend the $50,000-to-win Lucas Oil Late Model Dirt Series event on the weekend of June 17-18, 2022.

Weather Forecast: Daytime highs in the 50s with nighttime lows dropping into the 30s with little to no chance for rain.

Pre-race Notes: This is the first race of the 2021-22 season for the Drydene Xtreme DIRTcar Series.

This is the final race of 2021 for the Carolina Clash Series.

Heat Race Results: There will be three heat races with the top-5 transferring to the feature. The top-2 from each heat will go to the redraw.

4:30- Doing a little track prep. Feature should be rolling out soon.

Tire wear will become an issue as the race goes on.

Red flag just after the restart as a pileup on the backstretch occurred. Maresca rolled over. Hamm, Miller, Sanders and Vance all involved. Franklin and Dillon were also involved. All drivers reported to be ok.

5:37- Engines have re-fired. Drivers during the red flag told DirtVision that they believe tires will start to give way in another 30-40 laps.

Overton just pitted for two new rear tires. He did that in this race last year and won.

Lap 69 caution. Ramey crashes as Overton was charging forward and on his outside. They had contact and Ramey hit the backstretch wall.

Lap 83 caution for flat on Moran. Overton now flying as he is up to second and was pressuring Madden.

Madden did not change tires during the race. It’s his seventh Blue-Gray 100 win.

Overton threw everything at him but Madden held on. 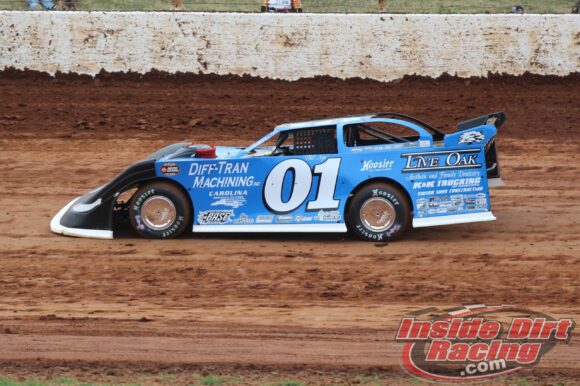 Chris Ferguson is expected to race in this No. 01 tribute car