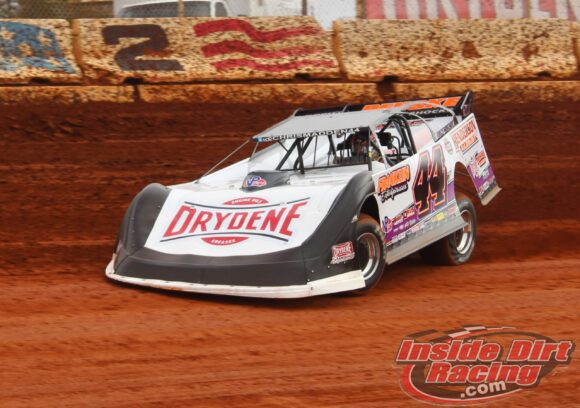 Chris Madden held off a late charge by Brandon Overton

The Drydene Xtreme DIRTcar Series staged its second race of the 2021-22 winter season while at the same time the Carolina Clash Series brought the curtain down on its 2021 campaign in the co-sanctioned Blue-Gray 100 at the Cherokee Speedway on Sunday afternoon. At the end of a day of tire conservation and tire changes, it was Chris Madden who claimed the win in the 31st annual running of this race at the Gaffney, SC track. The Rocket Chassis driver from Gray Court, SC earned $10,000 for his efforts.

After numerous drivers, including second-place finisher Brandon Overton stopped earlier in the race for fresh rubber, Madden held on for the win by keeping the tires he started the race with inflated.

Brandon Overton proved to be fastest in qualifying with a lap of 14.839 seconds around the 4/10 mile clay oval to beat out Ross Bailes, Devin Moran, Daulton Wilson, Chris Ferguson and Chris Madden.

It was Ross Bailes who claimed the second preliminary ahead of Chris Ferguson, Carson Ferguson, Ethan Wilson and Gary Dillon.

Chris Madden was the victor in the third heat after he defeated Devin Moran, Michael Brown, Jeff Smith and Benji Hicks.

The Xtreme DIRTcar Series redraw placed Bailes on the pole for the feature with Chris Ferguson, Maresca, Moran, Overton and Madden lining up in order accordingly.

At the start of the 100-lap main event it was Bailes who went to the lead with Chris Ferguson, Maresca, Moran and Overton in tow. Moran went on the move quickly as he moved by Maresca on the second circuit to assume third.

Soon after the start, the top-5 of Bailes, Ferguson, Moran, Maresca and Overton spaced out until a caution flag waved on lap 7 when the Watkins cars slowed on the track.

On the restart, Madden made a move to break into the top-5. The home track driver then took fourth away from Maresca on lap 12. Overton followed Madden’s lead and also got by Maresca to grab fifth.

A lap 21 caution for Cory Lawler reset the field for another restart. Moran bolted to the runner-up position as Overton was shuffled back in the middle of a somewhat rough restart.

The race took a dramatic turn on a lap 28 restart when the field jumbled on a restart causing a multi-car crash that sent Maresca rolling over. Franklin, Vance, Hamm and Dillon were among those involved. All drivers were reported to be okay.

The Ferguson cousins went on the move following the lap 28 restart as Chris went by Moran to grab second while Carson took fourth from Madden. Chris then moved up and began applying heavy pressure to Bailes as those two drivers contested the lead of the race until another yellow flag waved on lap 42.

Madden climbed back fourth following the lap 42 restart while Strickler moved forward into the seventh position by passing Overton. Madden continued his rise on lap 54 when he pulled into second. From that point, the top-5 of Bailes, Madden, Chris Ferguson, Carson Ferguson and Moran settled into single-file formation and worked to log laps

The drama began to build during a lap 65 caution when Overton pulled into the hot pit area for a change of his rear tires. The No. 76 team employed this strategy in this race last year to score the win.

By lap 82 it looked as if Overton’s scheme would work again as he pulled into second and began to chase down Madden. On multiple occasions over the closing laps, Overton was able to pull inside of Madden but the No. 44 machine was able to hold back the advances.

In the end, it was Chris Madden who earned his seventh career victory in the Blue-Gray 100.

Click the play button below to listen to a post-race interview with the victor: