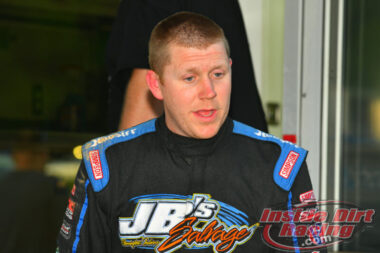 The year 2020 has been strange and out of the ordinary to say the least. Certainly, one place where that is absolutely true is in the world of Dirt Late Model racing. Bloomington, Indiana racer Kent Robinson is one who has experienced the oddness of this year as much as anyone.

The 32-year-old driver made only his first start of the season this past Saturday night in the Spring Sizzler event at 411 Motor Speedway in Seymour, Tenn. Unlike those who make their living in racing, Robinson may not have found himself in any sort of financial peril because of a lack of racing but he did miss the sport he has participated in since a very young age.

“Well, racing is more of a hobby to me is the easiest way to put it,” Robinson explained in an interview with InsideDirtRacing.com. “It might not have been as major to me as some but I definitely missed it, that’s for sure. It has been odd going to the shop everyday after work to get things done, and usually it’s a hustle, but since I haven’t raced since September I’ve had a lot of time off to get things in order.”

Like many around the country, Robinson has used the coronavirus shutdown time that might have been dedicated to other activities, such as racing, to get projects around his home completed.

“That’s been kind of nice and that actually got us caught up on some of the activities around home, the honey-dos you hear everybody talk about, and I’m right in line with everybody there,” the driver who has notched more than 50 career feature wins pointed out. “It’s just been odd, that’s the word we’ve been using, even at my business. It’s odd and eerie and weird and I think that’s one of the best ways to describe it.”

Having not begun his season until mid-May and considering that some states have more restrictive pandemic mandates in place than others, Robinson expects that his future schedule will be impacted by all that has and is going on around the world. As a result of more closures in place in his home region, the Kent Robinson Racing team has been forced to seek events in places they might not have traveled to in previous years.

“It would be silly to say it wouldn’t,” the driver known as K-Rob said of changes he expects regarding his future plans. “At this time last year I probably wouldn’t have been at this race track because it’s about seven hours from home. The pay is decent and I like this sanctioning body, I like Ray Cook and Chris Tilley and everyone involved. Financially it may not be the smartest thing but it’s time to dust ourselves off and get out and have a little fun.” 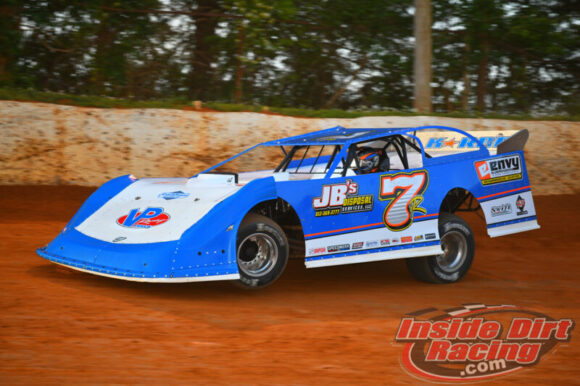 Like every other racer in America, Robinson’s current fate in the sport is being determined more by political leaders than it is by sponsors, promoters, or the various racing series. It is just the reality of our current situation and this driver is taking it in stride.

“I don’t like to get too political with anything but I just think everyone is doing the best they can,” he replied. “We may all have our disagreements about the way it should move forward but I want to take a second to thank the sanctioning bodies for putting their necks out and for the track owners for doing that and everyone working together.”

As far as racing is concerned, one aspect that drivers often mention as a major challenge in racing from region to region is the varying types of clay dirt found across the country. The red clay found in the southeast provides a different feel from the darker clay of the upper Midwest. However, Robinson points out that the type of dirt at 411 and other east Tennessee tracks is not necessarily new to him.

“My home track is Bloomington(IN) Speedway and it has bright red clay and that’s where I really cut my teeth,” the driver who has been in Super Late Models since 2010 described. “But yeah, you go up into Illinois and there’s that dark, black dirt and that’s different even from where I’m from. It’s cool to be able to drive around the country some and see different race tracks like that.”

One aspect of racing in this area that is very different for a native of the Midwest is the steepness of the banking of the turns, but Robinson enjoys the challenge. In his first trip to 411 Motor Speedway he earned fast time honors in his group during qualifying and eventually came home with a fourth place result in the final rundown.

“It’s east Tennessee racing, it’s banked race tracks,” he declared. “I’m a big fan of it, but they just race a lot different. I love that they had that morning practice since I’ve never been here before. It gave me a chance to get some laps in. The way cars handle when there’s that much banking it makes your mistakes not show up as much sometimes when the banking catches you. There’s a lot that goes on in the cockpit. I like that challenge and that’s where I see that the biggest difference is. We don’t have tracks like that back home.”