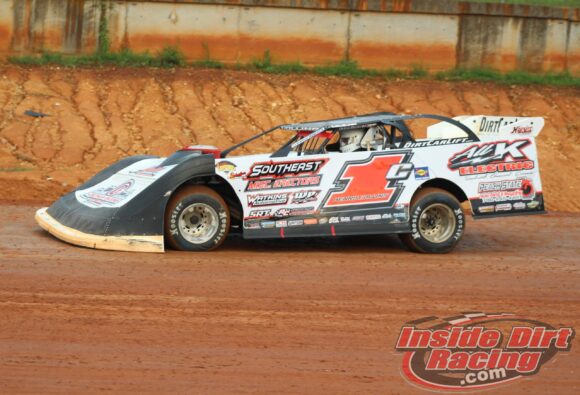 Kenny Collins assumed the lead when Dale McDowell had trouble

The Schaeffer’s Oil Southern Nationals rolled through the gate at the Tri-County Race Track on Tuesday night to contest its sixth race of the 2021 campaign. At the end of a fast paced night of racing at the Brasstown, North Carolina facility it was Kenny Collins who came away the victor. The Colbert, Georgia racer earned $4,053 for his efforts in a race shown live by FloRacing.com.

A total of 19 cars were signed in for competition.

Jensen Ford was fastest in Group A qualifying with a track record lap of 12.161 seconds around the quarter-mile clay oval to top Kenny Collins, Donald McIntosh, Cody Overton and Shawn Chastain.

The starting lineup for the main event was set entirely from qualifying results.

The initial start of the 40-lap feature was interrupted for a spin by Benjamin Cranford. Then a major moment would take place on the second attempt when pole sitter Ford spun in turn four.

McDowell went to the front when the race finally got underway with Collins, McIntosh, Payne and Overton trailing. However, the action was slowed again when a three car mishap for Jeff Neubert, Glen Barnett and Trevor Parker.

McDowell maintained the lead when green flag racing resumed as Collins, McIntosh, Payne and Overton worked to keep pace. Overton then took fourth from Payne on the third circuit.

A caution flag waved on lap 5 when leader McDowell became tangled with the slower car of Craig Greer to bring out a yellow flag. As a result, McDowell was placed in the eighth position as series officials determined that is where he blended in after the mishap with Greer.

Collins then assumed the race lead with McIntosh and Overton trailing. A lap was not officially scored as Tod Hernandez and Galen Robinson tangled in turns three and four.

Collins got the jump on the field when the green flag waved over a single-file restart. McIntosh and Overton wrestled for the second spot for several laps. At the same time, the second and third battle closed in on Collins to race for the lead at lap 15.

Collins extended his lead to more than five second son the lightning fast quarter-mile with McIntosh working to hold off Overton, Payne and Chastain. However, a caution on lap 32 would erase the Collins advantage and bring those who had been fighting top-5 spots into the race for the lead.

Collins would again pull away as those behind fought over positions within the top-5. In the end, Collins cruised under the checkered flag to collect the win.