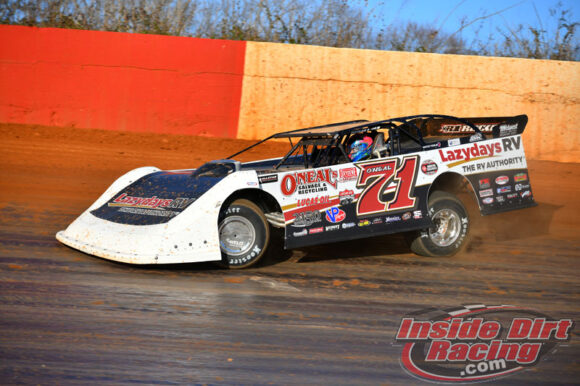 As teams looked to prepare for this weekend’s Prairie Dirt Classic, several competitors made their way to the Davenport Speedway to take part in the MARS Racing Series-sanctioned Hoker Trucking 50. After an intense night of racing that ended with a thrilling side-by-side finish, it was Hudson O’Neal who would emerge as the feature winner at the Iowa facility. The Martinsville, Indiana driver earned $10,000 for his efforts in a race shown live by FloRacing.com.

Scott blasted to the early lead when the green flag waved over the 50-lap feature with Feger, Overton, Shirley and Pierce in his tire tracks. The intensity level amped up almost immediately as Feger, Overton and Shirley went three-wide on the multi-groove track for second on the second lap. Feger would hold second but Shirley took third from Overton.

Further back, O’Neal made his presence known when he broke into the top-5 by passing Pierce on the third lap. Just three laps later, the eventual winner made his way by Overton for fourth.

On lap 9, Feger and Shirley cut into the advantage previously held by Scott to make for a three-way fight for the top spot.

Battles continued all over the speedway as the race hit the 15-lap mark. Shirley challenged Feger for the runner-up spot as Pierce and Overton waged war for fifth. All the while, Scott seemed to have things under control as he began to slip away from his pursuers.

Shirley was finally able to take second away from Feger on lap 22 while Overton reclaimed fourth from O’Neal.

A lap 23 caution for the slowing car of Rich Bell gave drivers a brief reprieve from the wild action. But on the restart, O’Neal made a big move as he shot all the way up to second from his fifth restarting position. Then, the No. 71 roared by Scott to grab the lead of the race on lap 26.

That move dropped Scott back into a fierce four-way fight for the remaining positions in the top-5 with Overton, Shirley and Pierce.

Overton moved up to third following a lap 26 restart and set out after the second-running car of Shirley. As those two cars battled, they closed on on the front running machine of O’Neal making it a three-way tussle for the top spot.

Finally on lap 34, Overton cleared Shirley for second and the stage was set for a battle to the finish with O’Neal. Just behind, Pierce got around Shirley for third on lap 38 and looked to join the fray at the front of the field.

The slowing car of Feger brought out the race’s final caution on lap 48 and set up a green-white-checkered dash to the finish. Overton seemingly had the lead on at least two occasions over those closing laps but was never quite able to pull up in front of O’Neal to complete the pass. As the cars roared off of turn four for the final time, O’Neal used high side momentum to just edge Overton at the finish line by .026 second to claim victory.