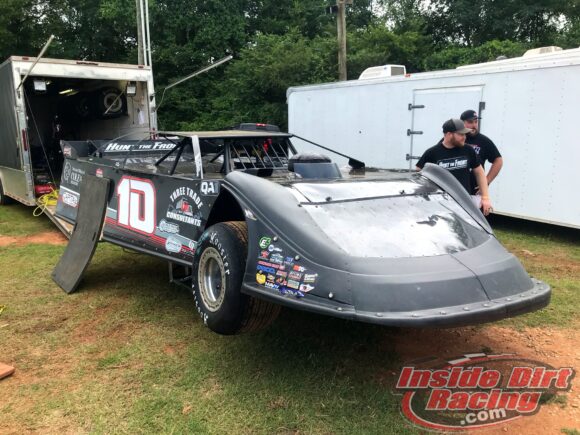 The 46th running of the National 100 took place on Sunday at the East Alabama Motor Speedway in Phenix City, AL. At the end of the night, it was Joseph Joiner who scored the win. The Milton, FL driver picked a paycheck valued at $15,000 for his efforts.

Dale McDowell was quickest in Group B time-trials and overall with a time of 15.761 seconds to top Brandon Overton, Joseph Brown, Joseph Joiner and Dana Eiland.

At the start of the 100-lap feature it was McDowell who went to the early lead with Seawright, Overton, Hiett and Brown trailing. But a caution for a spin by Matt Dooley at the end of the first lap immediately slowed the pace of the action.

McDowell began to pull away from the second place battle involving Seawright and Overton until his car suffered body damage after contact with a slower machine on lap 11. McDowell was able to continue in the race lead despite the mishap.

On the lap 11 restart Overton moved to second. At that point, the top-4 of McDowell, Overton, Seawright and Cook had broken away from the pack by lap 15.

On lap 25, pre-race favorite Overton pulled off the track and out of the race with mechanical issues. The slowing of the No. 76 allowed McDowell to pull away to a significant advantage over Seawright and Cook. Hiett and Martin rounded out the top-5 at the quarter mark of the feature.

Rodney Martin spun on lap 34 to bring out a yellow flag and bunch the field.

McDowell began to slip away from the field at the halfway mark but a lap 52 caution was displayed to the field for a flat tire on the Steven Roberts car. On the initial attempt to restart the race Seawright dove to the inside and slid into the lead car of McDowell. Significant contact was the result with Seawright appearing to take the lead until a yellow flag waved when Cook spun from third place.

McDowell was returned to the lead because a lap was not completed before the Cook spin. Seawright then pulled into the pit area and dropped from the race. That series of events elevated Erb and Hiett to the second and third positions.

Steven Roberts and Dalton Cook, each with new tires, began to climb through the field. Cook got by Erb for third on lap 67 then by Hiett for second on lap 69. Then a caution came out when the fourth running machine of Erb suffered a flat tire.

The caution nullified Cook’s pass of Hiett for the runner-up position. Cook then spun on the restart and had to restart from the tail.

McDowell continued to lead as the laps clicked away. However, after breaking away from a battle for second with Roberts, Hiett pulled to the rear spoiler of the No. 17m machine. While involved in a battle with Parker Martin for third, Roberts slid off the track in turn one on lap 81 to bring out a yellow flag.

Martin’s car came to life with a fresh right rear tire. He passed by Hiett for second on lap 82 then quickly went by McDowell for the lead. The young driver immediately pulled away and looked to be sailing away until a caution came out on lap 92 for a flat tire on the Hiett car.

Joseph Joiner moved into second on the lap 92 restart and set off in pursuit until another yellow flag waved with just two laps remaining.

A lap 98 restart set the stage for a final dash to the checkered flag. Martin jumped to the lead but Hiett tracked him down then went by in turn two on the last lap. However, Martin drove into the back of Hiett’s car on the back stretch sending the No. 1 spinning. Martin then slowed and Joiner blasted by to take the lead in the final corner.