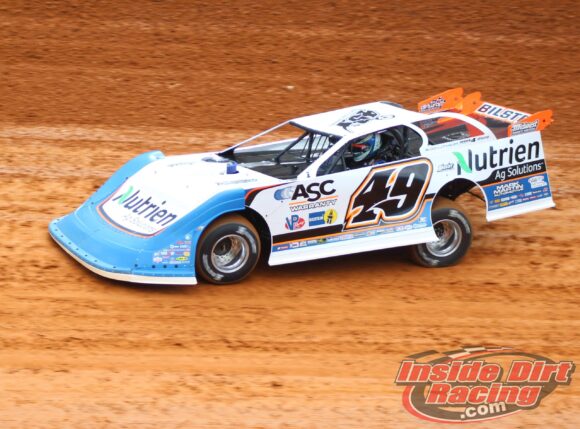 Defending FloRacing Night in America Series champion Jonathan Davenport showed why he was last season’s titlist by turning in a dominating performance in the season’s second race at Brownstown Speedway on Wednesday night. The victory served as a lucrative follow-up to the $50,000 triumph he scored last weekend at All-Tech Raceway in Florida.

The Longhorn Chassis driver from Blairsville, Georgia picked a $22,022 payday for his efforts on the quarter-mile Indiana track in a race shown live by FloRacing.com.

Feature Re-cap: The 50-lap feature got underway with Marlar leading ahead of Davenport, Overton, Pierce and Sheppard. Shaw moved by Sheppard for fifth on the  second lap. One lap later, Pierce took third away from Overton.

Davenport began to pressure Marlar for the race lead until the No. 49 passed by on lap 5. However, a caution for the slowing car of O’Neal on lap 7.

Pierce moved to second on the restart as Davenport continued to lead. Marlar, Overton and Shaw rounded out the top-5.

Davenport began to slip away building a lead of two seconds over Pierce on lap 15. But slower traffic would begin to become a factor by lap 20. However, Davenport kept his advantage as he put cars one lap in arrears.

Further back, Tuesday night’s winner, Larson, burst into the top-5 by passing Shaw pulling Sheppard along. The NASCAR champion then closed in on the battle for third between Marlar and Overton. Up front, Davenport’s lead was up to four seconds.

The final 43 laps ran under caution with Davenport controlling the event right down to the checkered flag to score the win.

“I didn’t know how big of a lead I had,” Davenport told FloRacing.com in victory lane. “I could see Jason, my crew guy, give me the lead but you never know how much you’ve got because I could just barely see him. I felt like I was struggling with the lapped cars. I’d get hung behind each one of them for several laps so I don’t know if the other cars were having that problem too. My car felt pretty good there.”