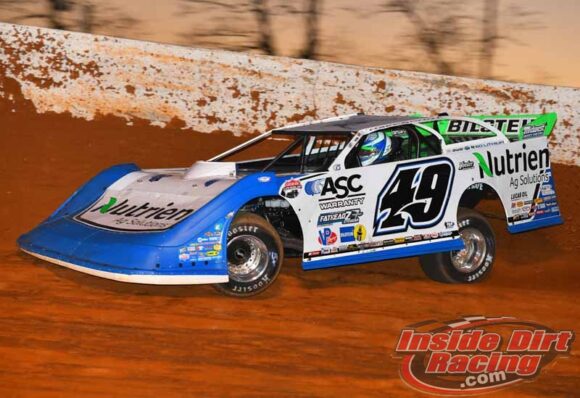 Jonathan Davenport had the dominant car in Group B

Dirt Late Model racers from all over the country pulled through the gates of the sport’s most historic venue for the first of a four-night event that will be highlighted by not one but two Dirt Late Model Dream features that will pay more than $125,000 to those winners. But on Wednesday, the field was divided into two groups for the purpose of contesting two separate shows.

In Group B on the first night of competition it was Jonathan Davenport who stood on the famed Eldora Speedway stage to receive the accolades as one of the two victors. The Blairsville, GA driver earned $10,000 for his efforts.

A total of 74 cars were signed in for competition.

Bobby Pierce, Jeep VanWormer, Steve Casebolt, and John Baker moved to the main event out of the lone B-main for this group.

At the start of the 25-lap feature the pole sitter bolted to the lead with Owens, Marlar, Hawkins and Larson in his wake. By the end of the third lap, Davenport had built a sizeable advantage over his pursuers. However, slower traffic on lap 7 would allow Owens and Marlar to close the gap.

A lap 9 caution for debris freed the leaders from traffic. On the restart, Larson jumped up to fourth and was looking to take third when a yellow flag for more debris on the racing surface again slowed the action on lap 10.

Hawkins passed by Marlar and Larson on the lap 10 restart to seize the third position as Davenport again drove away from the competition. A hornet’s nest behind the lead duo of Davenport and Owens wrestled for positiomn but this was to be the No. 49 car’s night.

Eventually, Davenport blasted over the start/finish line to score yet another Eldora feature victory.